BP plc late Thursday confirmed the rumors and agreed to pay $10.5 billion to acquire nearly all of BHP’s massive U.S. onshore portfolio, giving it entry into the Permian Basin in West Texas and substantial acreage in the Eagle Ford and Haynesville shales. 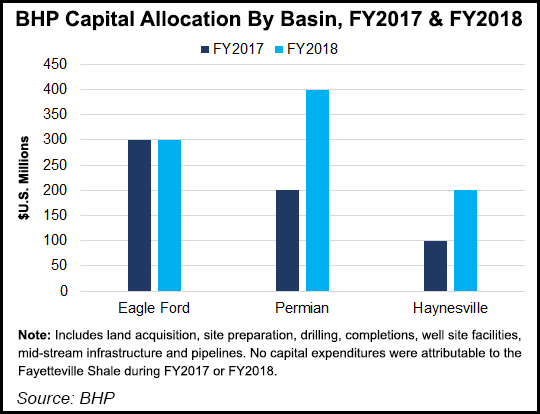 The BP transaction to acquire an estimated 470,000 net acres includes a leasehold in the red-hot Delaware sub-basin in West Texas.

“This is a transformational acquisition for our Lower 48 business, a major step in delivering our upstream strategy and a world-class addition to BP’s distinctive portfolio,” said Group CEO Bob Dudley.

There’s no doubt BHP, which would continue to be a significant player in the Gulf of Mexico (GOM), is losing money in the overall transaction. A big part of the portfolio was acquired in 2011, with the $12.1 billion takeover of Petrohawk Energy Corp. Also in 2011, it paid $4.75 billion to acquire the Fayetteville assets from Chesapeake Energy Corp.

BHP’s total current production in the Lower 48 is estimated at 190,000 boe/d and includes about 4.6 billion boe of resources.

According to BP, once its transaction is completed, along with a planned sale of some Alaska assets, its U.S. production would jump to about 885,000 boe/d.

BP’s existing Lower 48 oil and gas business today produces from operations across seven oil and gas basins in five states with resources of 8.1 billion boe. BHP, the world’s largest mining company, is selling to BP holdings in the:

The Haynesville additions alone would double BP’s existing production in East Texas and Southeast Louisiana, and more than triple its acreage position.

For BP, the assets being acquired are “a major upgrade” for the operator’s “key upstream regions, giving us some of the best acreage in some of the best basins in the onshore U.S.,” said upstream CEO Bernard Looney. BP’s onshore team should be able to “unlock the full potential of these assets,” improving free cash flow for the unit by $1 billion, to $14-15 billion in 2021, “and provide opportunities for continuing growth well into the next decade.”

With the acquisition, the liquid hydrocarbon proportion of BP’s production from the Lower 48 would increase to around 27% from 14%, while resources would climb to 29% from 17%.

Since BP established the U.S. onshore as a separate business organization four years ago, it has grown production and improved capital efficiency, with unit production costs reduced by 34% since 2013. The management team of the U.S. onshore unit, led from the start by CEO David Lawler, also has hinted that it would strike when the time was right to make a deal that fit with long-term strategies.

The combined business would continue to be led by Lawler. Post-integration, the Lower 48 business is expected to deliver more than $350 million of annual pre-tax synergies “through sustainable cost reductions and commercial and trading opportunities unique to BP,” the London-based oil major said.

Whispers that BP was making a play for the BHP portfolio have gotten louder in recent weeks, and the assets may have proven too good to pass up. BP in fact noted in the filing regarding the transaction that the value of the gross assets being sold by BHP were at the end of 2017 worth an estimated $13.9 billion, but as of the end of June, the assets had generated a pre-tax loss of about $800,000 million.

To sweeten the proposition to shareholders, keen to remain on stronger financial footing following restructuring after the Macondo well blowout in the deepwater GOM in 2010, BP plans to increase the dividend.

To fund share buybacks of up to $5-6 billion “over time,” plans are in motion to divest up to $6 billion of assets once the BHP portfolio is integrated. For starters, BP also increased the 2Q2018 dividend by 2.5% to 10.25 cents/share, payable in September.

“The financial repositioning we have delivered in recent years and the confidence we have in our outlook for free cash flow allow us to take this extremely attractive opportunity now without any adjustment to our financial frame,” CFO Brian Gilvary said. “This is fully consistent with our commitment to financial discipline and creating value for shareholders.

“With our planned additional divestments and buybacks, we expect to deliver this major step forward for a net investment of around $5 billion.”

The acquisition is to be “fully accommodated” within BP’s current financial frame. Organic capital expenditures remain set at $15-17 billion a year to 2021, with gearing to be maintained within a 20-30% range.

Under the terms of the agreement, scheduled for completion by the end of October, BP America Production Co. would acquire 100% of U.S. onshore subsidiary Petrohawk Energy Corp. from BHP Billiton Petroleum (North America) Inc. BHP would operate the assets until the transaction is completed.

The transaction is to be paid for through two equal installments of $5.25 billion, with the first payment upon completion and the second paid out over the following six months.

Australian-based BHP was an early entrant into the Lower 48 as unconventional drilling technique became de rigueur in the early 2000s, making joint venture deals to build its asset base. However, the luster began to dim following massive writedowns in the value of the gas-weighted assets.

In early 2016, BHP took a a $7.2 billion impairment charge against the carrying value of its unconventional leaseholds in the Permian, Eagle Ford, Haynesville and Fayetteville shales. A $2.8 billion charge mostly against the Eagle Ford assets later in 2016. It recorded a $266 million writedown in 2013 against its Permian leasehold. And in 2012, a similar $2.8 billion impairment was taken for the gas-heavy Fayetteville.

Last year, under pressure from activist investors, the Lower 48 portfolio was put up for sale, and earlier this year a data room was opened to give would-be investors a look under the hood.

“Our priority with this transaction is to maximize value and returns to shareholders,” said BHP CEO Andrew Mackenzie. “In August 2017, we confirmed that we would seek to exit our U.S. shale assets for value. Following a robust and competitive process, we have delivered on that commitment…”

Net proceeds from the sale would be returned to shareholders, he said. BHP expects to recognize an impairment charge of about $2.8 billion post-tax (or $2.9 billion pre-tax) against the carrying value of the onshore assets.

Wood Mackenzie senior analyst Maxim Petrov said the “most valuable” part of the BHP package is the Eagle Ford position because of its scale and attractive economics.

“But the Permian acreage offers the biggest longer-term upside, with some of the best breakevens in the play, well below $50/bbl Brent,” he said. “Similarly, the Haynesville assets have some of the most attractive shale gas economics outside the Marcellus, and nicely complement BP’s existing acreage in the play.”

BP has “plenty of running room…to add value straight away as the assets have been under-invested for the past two years.”

Up to this acquisition, BP was underweight to U.S. tight oil versus its peers. This transaction would transform the domestic business and raise U.S. output by almost 20%.