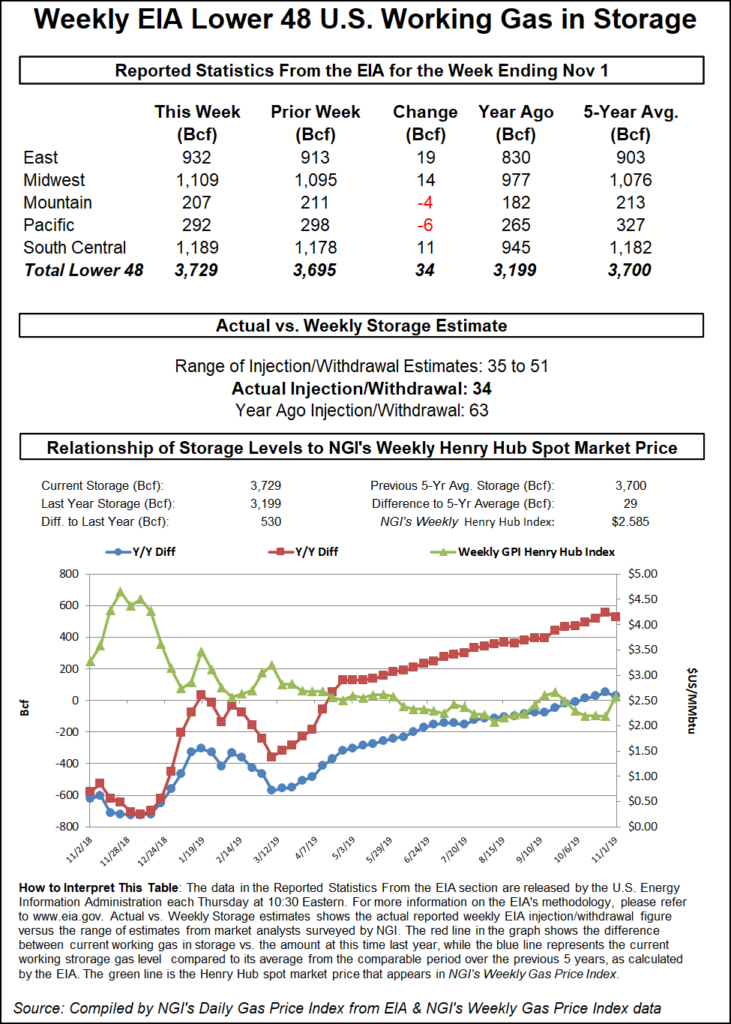 The front month rallied to reach an intraday peak of $2.882 after the Energy Information Administration (EIA) reported a surprisingly lean 34 Bcf weekly injection into U.S. natural gas stocks, but that initial rush proved a fleeting sugar high in the face of further warmth advertised in the latest weather model runs.

The 34 Bcf build, recorded for the week ended Nov. 1, came in about 10 Bcf below consensus and undercut both the 63 Bcf year-ago injection and the 57 Bcf five-year average.

Midday data from the Global Forecast System (GFS) extended milder trends that showed up overnight, resulting in a loss of around 16 heating degree days over the previous 24 hours, according to NatGasWeather. Guidance Thursday showed an Arctic blast on tap for next week exiting more quickly, the forecaster said.

“There’s likely to be a quick cold shot into the Northeast late next week,” and guidance was “a touch colder” for this period, NatGasWeather said. “However, the frigid cold pool is favored to retreat into Canada Nov. 19-22, thereby being too far north to be tapped by U.S. weather systems, which is also what the overnight European model favored.”

With $2.90 resistance holding once again for the prompt month Thursday prior to the sell-off on the milder GFS data, “bears appear to be gaining some momentum.”

Bespoke Weather Services had cautioned that the rally following EIA’s report could find sellers without colder-trending guidance to back it up. The firm pointed to a drop in production, stronger power burns and higher liquefied natural gas (LNG) feed gas demand as drivers of the tighter week/week balances reflected in the latest storage stats.

“For these reasons, we still consider it rather neutral” despite the number coming in bullish to market expectations, Bespoke said.

As for the weather outlook Thursday, “we continue to see trends in models that, at the least, favor slightly less intense cold over the next couple of weeks as a whole, and some hints” of warming later in November, the forecaster said. “We do think a milder pattern comes toward the end of the month into at least early December but are cautious on timing it, knowing models could be too quick with changing the pattern and thus could edge back colder first.”

With cold moving in, spot prices started to look a lot more winter-like in New England Thursday, sending the Northeast regional average roughly $1 higher day/day. The Algonquin Gas Transmission system, typically congested during periods of cold weather, had an operational flow order in effect starting Friday as forecasts called for lows to drop into the 20s in Boston.

The National Weather Service (NWS) continued to call for an upper level ridge over the West Coast and a broad upper level trough east of the Rockies to enable chilly temperatures to sweep through the Lower 48 to end the week.

A “strong cold front” was expected to reach the Gulf Coast and East Coast by Thursday night, with potentially record-setting low temperatures for this time of year behind the front from the Plains to the East Coast

“A broad swath of light to moderate rainfall can be expected along and just behind the cold front from Texas to the Mid-Atlantic region” into Thursday night, the NWS said. “Rain is forecast to change to snow across interior portions of New York and northern New England before ending Friday morning. Several inches of snow accumulation is possible across the higher elevations.”

Still, the region could see additional upward price pressure into next week, when even chillier conditions are expected to arrive. Weather Underground was predicting lows in the teens in Chicago Monday and Tuesday, with the possibility of snow showers.

Previously reported maintenance at Natural Gas Pipeline Co. of America’s (NGPL) Sinton meter has been rescheduled and is now expected to conclude on Friday, which could have implications for flows bound for the Corpus Christi LNG terminal.

Since Tuesday’s gas day, delivery nominations to Corpus Christi LNG have remained around 660 MMcf/d below the previous seven-day average, according to Genscape Inc. analyst Allison Hurley.

Prior to being rescheduled, the maintenance had originally been expected to occur during Tuesday’s and Wednesday’s gas days.

“Note that deliveries from NGPL are not the only interconnect meter attributed to the decreases in deliveries to the Corpus Christi Pipeline (CCPL),” Hurley said.

Deliveries from Transco (aka, Transcontinental Gas Pipe Line) onto CCPL remained down around 130 MMcf/d on Tuesday and Wednesday compared to totals for the week leading up to the dip in nominations, according to the analyst.

Overall daily volumes delivered to U.S. LNG export facilities have been down this week, according to data collected in NGI’s LNG Insight. LNG export deliveries totaled 6.91 million Dth/d for Thursday after peaking at 7.66 million Dth/d this past weekend.