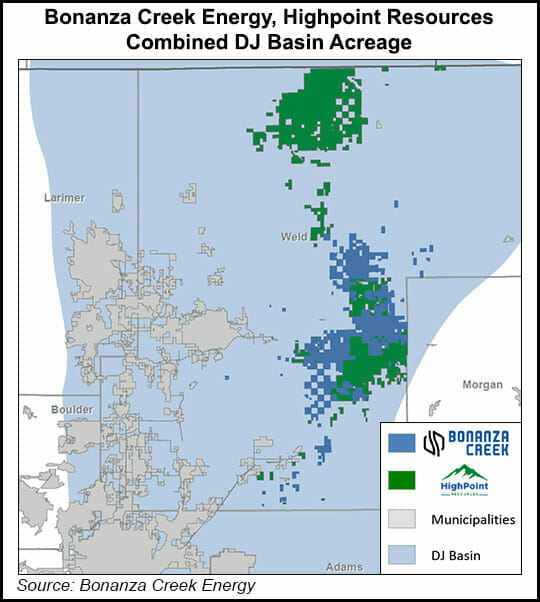 Bonanza Creek completed its merger with HighPoint on April 1. The closing allows the Denver-Julesburg (DJ) Basin operator to revamp the overall drilling schedule for the drilled but uncompleted wells, or DUCs, pushing some to later this year.

Streamlining and consolidating the DJ operations may result in a lower production outlook for 2021 than initially forecast in November when the merger was announced. However, the overall outlook is solid, said Greager.

“It’s been nearly five months since we announced our merger with HighPoint,” he said. With the purchase complete, he now can “speak with greater clarity regarding our 2021 guidance for the combined company.

“In the time since the merger announcement, we have benefited from exposure to higher commodity prices that have lifted our 2021 cash flow expectations, but also made adjustments to the development schedule. This added approximately $35 million in cash at closing, and sets up greater operational flexibility going forward.”

Some of HighPoint’s DUCs that had been set to be completed in late 2020 and early 2021 were rescheduled to later this year “to allow our combined teams the opportunity to design the completions and optimize facility and gathering capital.”

The changes may result in lower full-year 2021 pro forma production than estimated in November, “but the decision to complete these wells as a combined team creates real value,” Greager said.

“We have taken immediate steps to allow us to deliver the estimated $31 million of first-year synergies that we identified in November, and we expect to deliver those synergies in the first 12 months from closing,” the CEO said. “All things considered, we estimate our 2021 pro forma levered free cash flow at over $150 million at current commodity prices…We’re quickly integrating two new directors into capital allocation discussions, and plan to announce formal plans with our first quarter earnings.”

This year’s capex plan includes completing 39.9 net DUCs and adding a drilling rig in 4Q2021. Completion activities began in early January on Bonanza Creek DUCs, with HighPoint’s inventory set to draw down in the second half of the year. The company expects to exit the year with 30 gross DUCs from the current inventory.