A pair of prominent oil and gas companies active in the Denver-Julesburg Basin (DJ) are keeping capital expenditures (capex) in check while posting modest upticks in sales volumes. 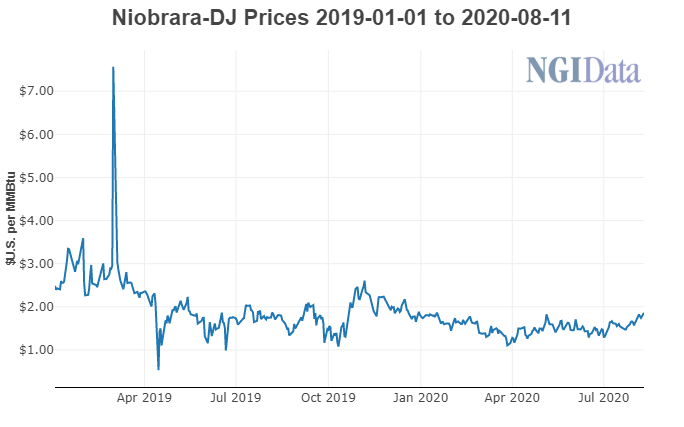 Bonanza Creek Energy Inc. and Highpoint Resources Corp., both based in Denver, reported substantial second-quarter losses, however, dinged by lower sales prices in the wake of the crash in crude oil prices earlier this year.

Bonanza reported average sales volumes of 24,900 boe/d for the second quarter – with oil accounting for 56% of total volumes – up 2% from a year earlier. The company provided full-year production guidance of 24,500 boe/d at the midpoint, up from earlier guidance of 24,000 boe/d.

“During the quarter, we had the opportunity to acquire working interest in over 25 wells that we operate, including interest in wells that have been recently turned to sales and are still building production,” Bonanza CEO Eric Greager said during an earnings call last week. “A combination of wells turned to sales in the last six months performing stronger for longer, and this acquired interest, has led us to increasing our annual guidance range for the year.”

Crude oil sales prices in 2Q2020, though, were half of where they were a year earlier, and natural gas prices were down nearly 40%. Net oil and gas revenue for the second quarter was $36.2 million, down from $85.8 million in the same period a year earlier.

That helps explain why the company is keeping capex and operating costs low.

Second-quarter capex of $21.7 million was nearly half the level of the first quarter and brought the year-to-date capex to $62.8 million, at the lower end of annual guidance expected in the $60 million to $70 million range. The company maintained that range.

“As we have previously stated, we had expected our capex for the year to be heavily weighted to the first half of the year,” Greager said.

Bonanza said its cash general and administrative expense, which excludes stock-based compensation and cash severance costs, was $6.1 million for the second quarter, down 21% from the first quarter.

The company finished the second quarter with $58 million of debt and a leverage ratio of 0.3x. It expects to fully repay outstanding debt by the end of the year.

Highpoint, meanwhile, also posted an uptick in volumes. The company reported second-quarter production sales volume of 2.9 million boe, up 1% from a year earlier. Volumes for the second quarter were 57% oil, 23% natural gas and 20% natural gas liquids.

“The quarter was highlighted by continued positive well results” from both the Wattenberg and Hereford fields in the DJ Basin, “as high-fluid intensity completions continue to exceed previous well results,” Highpoint CEO Scot Woodall said on the company’s earnings call last week. “This contributed to total production volume exceeding the high end of our guidance range by 12% and oil volumes exceeding the high end of our guidance by 11%.

“Importantly,” he added, “this was accomplished with a capital expenditure that was 38% lower than our guidance, highlighting our commitment to capital discipline.”

Highpoint’s second-quarter capex of $25 million was down from $70 million in the first quarter. It deferred drilling and completion activity in the early days of the coronavirus pandemic, citing weak oil prices. It also cut operating costs in the second quarter.

“Given the sudden drop in oil prices, we quickly and decisively took immediate action to align our cost structure to the expected future operating environment,” Woodall said. “This resulted in immediate tangible benefit and a material reduction in second quarter reoccurring controllable operating costs of 12% compared to the first quarter of this year. We continue to look for opportunities to reduce costs further.

“We are currently monitoring future oil prices along with the pace of a broader macroeconomic recovery to determine the appropriate time to resume activity,” he added. “We have an inventory of over 20” drilled but uncompleted wells “that will allow us to quickly resume completion activity if prices warrant.” Should crude prices continue to hover in the $40s, activity could start to pick up in the fall, he said. But before adding a rig, prices would need to range from $45 to $50.

Highpoint said it had cash and cash equivalents of $3 million at June 30, and long-term debt of $795 million, with $175 million outstanding on its credit facility.