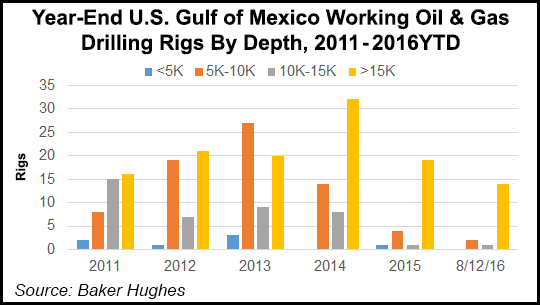 In a notice of intent published in the Federal Register on Friday, BOEM said it plans to prepare a supplemental environmental impact statement (SEIS) on the scope of the environmental analysis proposed for Lease Sales 250 and 251. The Outer Continental Shelf sales are part of the proposed five-year package being considered by the Department of Interior for 2017-2022 (see Daily GPI, Jan. 27, 2015).

The Draft Proposed Program tentatively has scheduled 13 lease sales — 10 in the GOM and three off the coast of Alaska — with one proposed sale for the Atlantic Ocean now scuttled (see Daily GPI, March 15).

BOEM’s five-year plan proposes lease sales for the Western and Central GOM, which in total would offer blocks in about 72 million acres. Not to be included are “whole and partial blocks” within the boundary of the Flower Garden Banks National Marine Sanctuary, blocks deferred by the GOM Security Act of 2006 and blocks that are beyond the U.S. Exclusive Economic Zone in the area known as the northern portion of the Eastern Gap.

Four public scoping meetings to discuss Lease Sales 250 and 251, each to be held from 4-7 p.m. CDT, are planned in September:

Parties have 30 days from Friday (Aug. 19) to submit written comments on the scope of the SEIS, issues that should be addressed, alternatives to be considered and types of oil and gas activities of interest, BOEM said. Comments sent via mail should be labeled on the envelope as “Scoping Comments for the GOM 250 and 251 Supplemental EIS” and delivered to Gary D. Goeke, Chief, Environmental Assessment Section, Office of Environment (GM 623E), BOEM, GOM OCS Region, 1201 Elmwood Park Blvd., New Orleans, LA 70123-2394. Comments also may be sent via the internet using portal www.regulations.gov. Search for Docket No. BOEM-2016-0047 and click on “Comment Now!”