The pipeline industry is a bit behind the times in capitalizing on the Williston Basin shale oil boom, but railroads like BNSF Railway are happy to accommodate oil producers with a means to get their product to market. 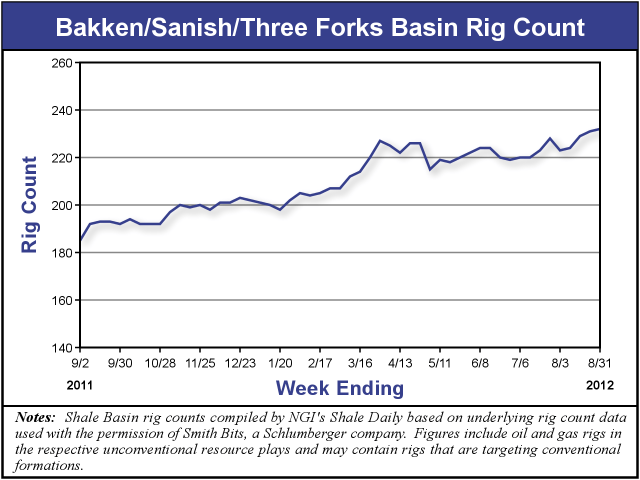 “Historically, oil and gas producers have used pipelines to transport crude from production to refineries and ultimately on to end-users,” said John Lanigan, BNSF chief marketing officer. “Because this shale development growth came about so quickly, there has been a shortage of pipeline capacity to deliver production from new unconventional sources to coastal refiners. BNSF has responded quickly to enable producers to move crude to the most attractive markets and secure the best prices.”

BNSF said it has increased capacity so far this year to enable the railroad to haul 1 million b/d of oil out of the Williston Basin in North Dakota and Montana. The increased capacity would allow the energy industry to continue the expansion of oil production in the Williston Basin and to ship to markets throughout the United States. It would also benefit shippers of other commodities, including agricultural products, BNSF said.

“The value of our Bakken crude is lowered by present limited pipeline capacity in the region,” Statoil’s Tor Martin Anfinnsen, senior vice president of crude, liquids and products said recently (see Shale Daily, Aug. 31). “Transporting the crude by rail bypasses the pipeline bottlenecks and ensures our products get to market and that we get the highest possible price.”

Through direct and interline service, the BNSF network reaches all major coastal and inland markets, and it directly serves 30% of U.S. refineries in 14 states, the railroad said. BNSF has 1,000 miles of rail line in the Williston Basin area and serves eight originating terminals with two more scheduled to be completed by the end of this year. BNSF connects to 16 of the top 19 oil-producing counties in central and western North Dakota, and five of the six oil-producing counties in eastern Montana.

“BNSF has been hauling Bakken crude out of the Williston Basin area for over five years. In that time, we have seen the volume increase nearly 7,000%, from 1.3 million bbl in 2008 to 88.9 million in 2012,” said Dave Garin, BNSF group vice president for industrial products. “We see this trend continuing, and we are committed to serving this growing market now and in the future.”

The Bakken/Sanish/Three Forks play has been one of the hottest unconventional oil and gas targets for producers over the last year. According to NGI‘s Shale Daily Unconventional Rig Count, for the week ending Aug. 31 there were 232 rigs in operation in the play, which marks a 25% increase from the 185 rigs counted for the same week one year ago.

BNSF has been able to achieve its increase in capacity due to increased investment, maintenance and hiring efforts. The company said it is investing $197 million this year on projects in North Dakota and Montana. Some of those projects include 2,188 miles of track surfacing, two new inspection tracks, replacement of 121 miles of rail and about 332,000 rail ties, as well as signal upgrades and equipment acquisitions, the company said.

Since 2011 BNSF has hired more than 560 employees to fill existing and newly created positions in North Dakota and Montana. These employees include crews to help deliver the inbound freight that supports drilling efforts and the outbound crude to destination markets throughout the U.S.

In addition to hiring new employees in the field, BNSF has also formed a dedicated Unit Energy Desk that works with customers to help coordinate and plan unit train movements to and from the Williston Basin.