International producer BNK Petroleum Inc., whose U.S. operations are centered in the Ardmore Basin, has spud a well in the Tishomingo field of the South Central Oklahoma Oil Province (SCOOP) and said it plans to participate in another well this month. 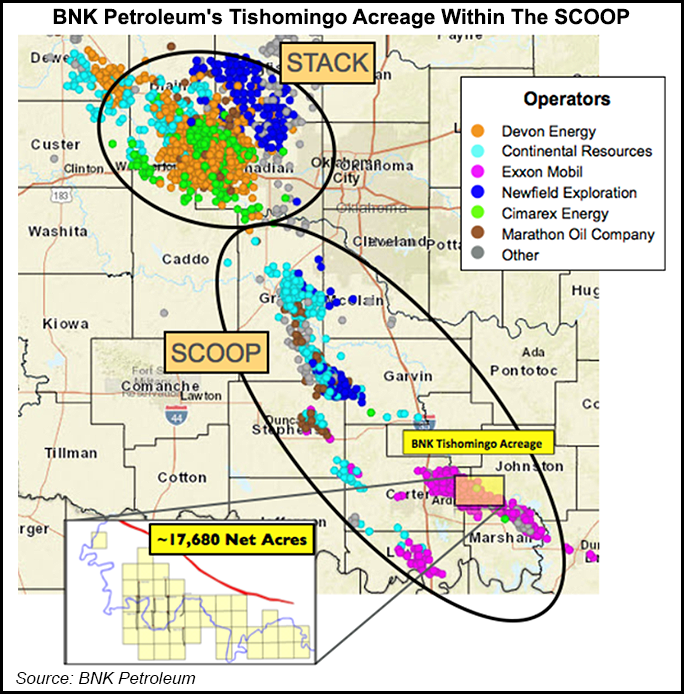 BNK, which has corporate offices in Camarillo, CA, said it added a rig and is drilling the Brock 4-2H well, which it operates with a 77% working interest (WI). The well is targeting the Caney Shale, a shallow oil formation in the Ardmore Basin. An unidentified producer, which serves as offset operator and holds the remaining 23% WI, elected to participate in the Brock well. Existing cash flow would cover BNK’s share of costs.

The independent also plans to participate in a second well targeting the Caney, Anderson 1-5H10X3, (33% WI). A two-mile lateral across Sections 3 and 10 is planned for the well, which is east of the existing Brock 9-2H well. According to BNK, the unidentified producer also has the right to participate as operator.

“At the current price of oil at over $68/bbl, our incremental netbacks for these wells are estimated to be over $37/bbl, which represents a substantial contribution to the company’s cash flow,” BNK management said.

BNK was formed in 2008, when Bankers Petroleum Ltd. spun off its U.S. unconventional exploration assets.

BNK’s activity comes as other operations are heating up in the region. In August, Marathon Oil Corp. reported increased production in Oklahoma, where the four-well Lightner Woodford infill pad targeting the SCOOP delivered an average 30-day initial production rate of 2,620 boe/d.

Toronto-based Franco-Nevada in early August said it would pay $220 million for a stake in a newly formed Continental Resources Inc. subsidiary to acquire minerals in the SCOOP and the STACK, aka the Sooner Trend of the Anadarko Basin, mostly in Canadian and Kingfisher counties. Days later, Continental reported that in 2Q2018, SCOOP production increased 6% y/y and 4.5% sequentially, to 64,786 boe/d.