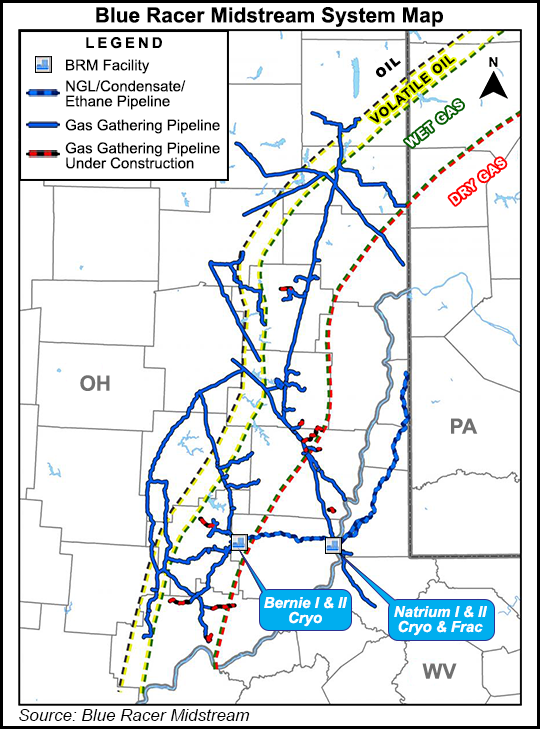 On Tuesday, Casey Nikoloric, a spokesperson for Blue Racer, confirmed to NGI’s Shale Daily that CEO Stephen Arata said the company will begin moving its products by barge sometime in 3Q2016. He made the comments after Blue Racer officials gave a presentation at the Utica Midstream seminar on June 8. The event was organized by the Canton Regional Chamber of Commerce and held at the Pro Football Hall of Fame.

Blue Racer operates in southeast Ohio and the panhandle of West Virginia, in the heart of the Marcellus and Utica shales. According to company’s website, Blue Racer currently operates 688 miles of natural gas gathering lines and 153 miles of natural gas liquids (NGL) and condensate gathering lines. It also has 800 MMcf/d of natural gas processing capacity in the region, as well as 123,000 b/d of fractionation capacity and 12,500 b/d of condensate capacity. The company would not specify which products would be transported by barge.

The company would presumably make barge shipments from its facilities along the Ohio River at Natrium, WV (see Shale Daily, Jan. 31, 2012). The Natrium complex is situated on a 95-acre site in Marshall County, WV, and has two cryogenic natural gas processing plants, each with 200 MMcf/d of processing capacity. A 200 MMcf/d processing train currently under construction at Natrium would increase the facility’s capacity to 600 MMcf/d when completed (see Shale Daily, Jan. 29).

According Blue Racer’s website, the company held four gathering contracts — with aggregate acreage dedications of approximately 211,000 acres, including 48,000 acres associated with 40 dedicated well pads — at the end of July 2015. The company also has one volumetric gathering commitment, under which a customer pays a fee based on a minimum throughput of 180 MMcf/d.

In a related matter, last February the U.S. Coast Guard (USCG) withdrew a proposal to allow barges to transport wastewater in bulk from hydraulic fracturing operations along the nation’s waterways (see Shale Daily, Feb. 25). The USCG said it withdrew the idea in part due to tepid support from the oil and gas industry, but it may revisit the idea in the future.