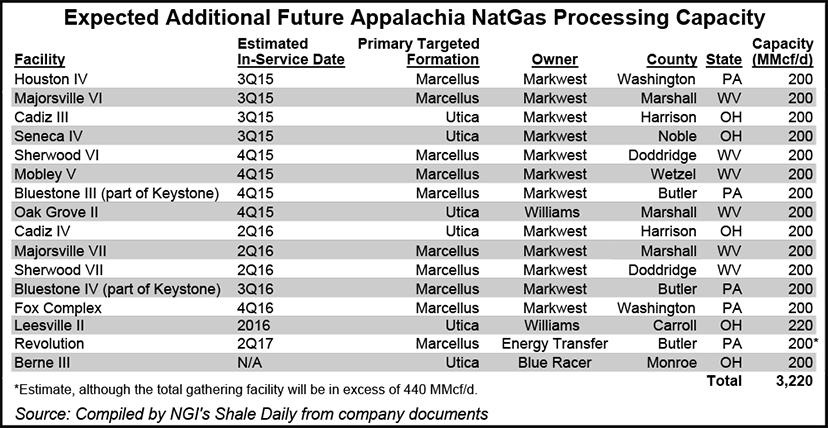 The new plant, Berne II, joins a twin facility now in service, as well as two 200 MMcf/d plants operating at Blue Racer’s Natrium Natural Gas Processing and Fractionation Complex in Marshall County, WV. A 30-mile, y-grade pipeline connects Berne to Natrium. Natrium’s fractionation capacity has been expanded to 123,000 b/d, enough to serve at least six 200 MMcf/d cryogenic plants, management noted. A fifth processing plant now is being planned for service in the first half of 2016 to meet growing customer demand.

“Blue Racer has a very high-quality producer base, and we are excited to support the ongoing success of these outstanding operators in the most prolific areas of the Utica,” said CEO Stephen Arata. “The beauty of Blue Racer’s Super System is in the strategic placement of assets, which provides optionality and coverage. We have the ability to pick up gas virtually anywhere in the Utica, get it to one of our facilities for processing and deliver residue gas and purity products to multiple markets…

“Despite the downturn, in just the past year we have doubled our processing capacity and nearly tripled fractionation capacity in response to our customers’ needs.”

Blue Racer was formed in late 2012 as a joint venture between Caiman Energy II LLC and Dominion (see Shale Daily, Dec. 24, 2012). In the past year, processed volumes across its footprint have more than tripled to 650 MMcf/d, while total gathered volumes, including lean gas, have more than doubled to 825 MMcf/d-plus. The system holds long-term service agreements with 14 gas producers in Appalachia, with total acreage dedications of about 200,000 acres and volumetric commitments of 380 MMcf/d.

More liquids processing is seen as key to keeping pace with expected growing production. In a reprise of previous plans by itself and competitors, Kinder Morgan Inc. last week launched a binding open season to close on Sept. 15 for the proposed Utica Marcellus Texas Pipeline, which would carry natural gas liquids from Appalachia to the Texas Gulf Coast (see Daily GPI, June 17). The project would transport propane, butane, natural gasoline, y-grade and condensate in batches, with maximum capacity of 430,000 b/d. With customer support and regulatory approval, the system could be running by late 2018.