The Bureau of Land Management’s (BLM) Utah office in Salt Lake City said the results of its latest quarterly oil and natural gas lease sale showed significantly lower proceeds and activity than a year earlier.Separately, a previously scheduled auction in August has been canceled to combine with one planned in November. 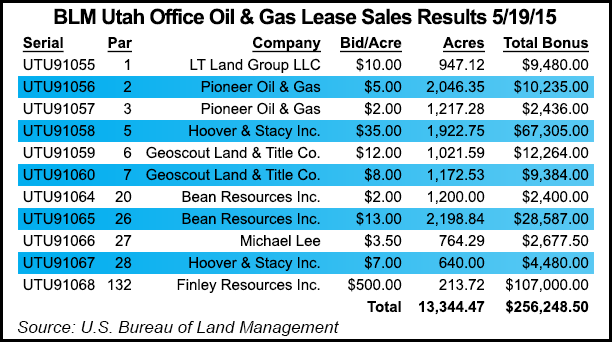 Results for the most recent sale, announced on Tuesday, grossed $20,023 in rental fees and $1,705 in administrative fees, which combined with bonus bids resulted in total receipts of more than $277,000. Proceeds are shared with the state and the county where the leased lands are located.

Fort Worth, TX-based Finley Resources Inc. submitted the highest total bid-per-acre ($500) and the highest bid-per-parcel ($107,000). Finley picked up Parcel 132, which is in the service area of BLM’s Vernal, UT, field office.