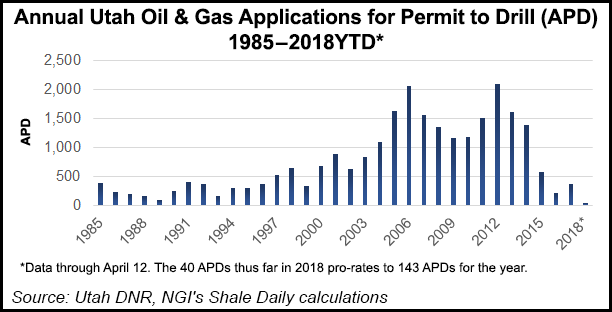 XTO proposes to develop gas resources in the Horsebench area, envisioning up to 19 potential well pads that could accommodate up to 175 wells. The ExxonMobil Corp. subsidiary plans to apply for rights-of-way to construct, operate and maintain co-located access roads and gathering pipelines within linear corridors that would support the proposed wells. Interim reclamation would be conducted in areas not used for production purposes.

The wells would be within the project area contained in the environmental impact statement for the West Tavaputs Plateau Natural Gas Full Field Development Plan, which was signed in July 2010.

During the past eight years, XTO has been one of several exploration and production (E&P) companies targeting the Uinta. BLM over the period has approved, among others, Gasco Energy Inc.‘s plans for up to 1,300 wells over 3,600 acres, and XTO’s 2012 Riverbend gas project.

In early 2015, BLM started the public scoping period for a proposed gas drilling project on federal lands in northeast Utah’s Duchesne County in the Uinta Basin. As part of its drilling work for Denver-based Gasco, Houston-based Wapiti LLC obtained BLM’s approval to construct one well pad, including roads and pipelines in the area that is part of the larger 10,000-acre Riverbend Project.