The Department of the Interior’s Bureau of Land Management (BLM) announced Friday that it will suspend coal leasing on federal lands pending a “comprehensive review” of the program. 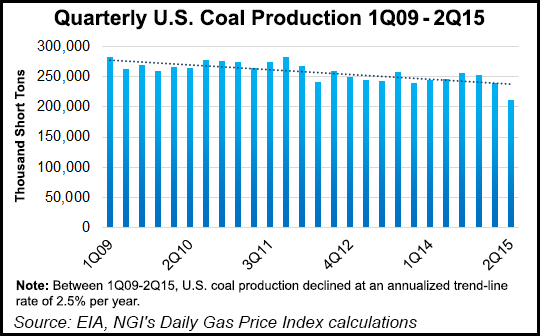 BLM described the move as an effort make sure the federal coal program “is properly structured to provide a fair return to taxpayers and reflect its impact on the environment, while continuing to help meet our energy needs.” The suspension will only affect new leases, and “there will be limited, commonsense exceptions to the pause, including for metallurgical coal,” BLM said.

The announcement comes just days after President Obama’s final State of the Union address, in which he promised to “push to change the way we manage our oil and coal resources, so that they better reflect the costs they impose on taxpayers and our planet” (see Daily GPI, Jan. 13).

The review will take the form of a Programmatic Environmental Impact Statement and will examine “how, when, and where to lease; how to account for the environmental and public health impacts of federal coal production; and how to ensure American taxpayers are earning a fair return for the use of their public resources,” BLM said.

“Even as our nation transitions to cleaner energy sources, building on smart policies and progress already underway, we know that coal will continue to be an important domestic energy source in the years ahead,” BLM Secretary Sally Jewell said. “We haven’t undertaken a comprehensive review of the program in more than 30 years, and we have an obligation to current and future generations to ensure the federal coal program delivers a fair return to American taxpayers and takes into account its impact on climate change.”

The move from BLM is a sign of further trouble for an already struggling coal industry. Amid the promise of regulations on carbon emissions and facing stiff competition from cheap natural gas, coal’s share of U.S. electric generation slipped in 2015 (see Daily GPI, Jan. 11; Dec. 2, 2015; Oct. 28, 2015).

Tom Sanzillo, director of finance for the Institute for Energy Economics and Financial Analysis, praised the Obama administration for taking steps to reform the current model for leasing federal lands for coal development.

“President Obama is doing for the coal industry what it cannot do for itself. With the recent bankruptcy filing of Arch Coal, the U.S. has now seen 50 coal company bankruptcy filings since 2012,” Sanzillo said.

Sanzillo said the industry has failed to adapt to changes in the market.

“The coal industry is shrinking, and it will continue to shrink for the foreseeable future. It will be a much less important source of energy for the nation’s electricity grid going forward. However, coal has a future — a future that includes fewer companies and less mining to supply a much smaller number of coal-fired power plants,” he said.