Interior Secretary Sally Jewell last Friday called out a new Bureau of Land Management (BLM) master leasing plan (MLP) for federal lands in east-central Utah as a model for how communities can balance oil/natural gas development with protection of iconic landscapes such as the lands around Moab, UT. The plan begins a 90-day comment period Friday, but some industry sources are already calling the MLP redundant. 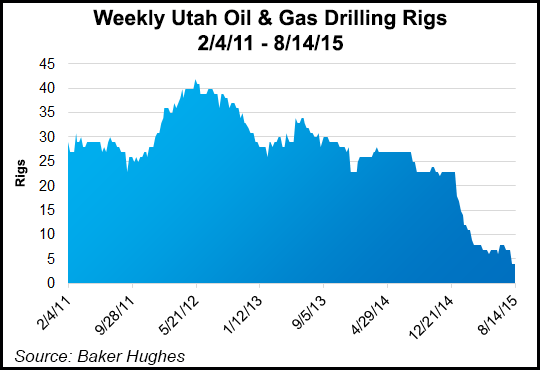 Separately, Jewell and BLM noted they planned to initiate two other Utah MLPs — San Rafael Desert (524,854 acres) and Cisco Desert (320,000 acres) — this fall, which will bring the federal agency’s completed MLPs to nearly a dozen in the resource-rich states of Colorado and Wyoming, in addition to Utah.

This is BLM’s first MLP in Utah, although the planning process was developed five years ago as part of what the Obama administration has labeled as “sweeping” oil/gas leasing reforms that at the time were needed to reverse sustained community protests and litigation that were threatening to undo the BLM leasing program.

The proposed Moab MLP is the result of what Jewell and BLM officials called “thoughtful planning and intensive analysis” that included a very active collaborative process with stakeholders on the ground in Utah. It includes a draft environmental impact statement (DEIS) and draft amendments to the BLM resource management plans (RMP) for Moab and Monticello field offices, respectively.

Oil, natural gas and potash development are looked at in the MLP and draft amendments, covering 946,469 acres in Utah’s San Juan and Grand Counties, 785,567 acres administered by BLM and another 160,902 acres of state, private and split estate lands. Along with oil/gas, mining and livestock grazing commercial uses, the lands include private and commercial recreational activities, the latter drawing more than 2 million visits annually to a variety of arches, natural bridges, mesas, and spires.

BLM’s action also carves out several hundred thousand acres as being prohibited from future development — 145,000 acres will not be eligible for oil/gas leasing, and between 134,000 and 306,000 acres will be designated for “no surface occupancy,” so they can only be accessed by directional drilling from nearby lands that are eligible for development.

“The RMP already determined what areas were appropriate for leasing and which were not,” Sgamma said. The RMP had already set acreage off limits, but the latest BLM action “puts restrictions on even more acreage,” she said. “The RMP has been in place since 2008 and it’s still a good plan, but this is another bite at the same apple.”

In addition to the commercial and recreational uses, BLM officials pointed out that parts of the lands involved hold special significance to Native Americans.

“Moab has some of the most iconic scenery on the Colorado Plateau, but it is also rich with energy resources, so we need to take a landscape-level approach to minimizing potential resource conflicts,” said Jewell, characterizing Utah’s first MLP as a model that will protect “world class environmental, cultural and recreational resources.”

In recent years, BLM’s leasing program has produced annual oil production of 205 million bbls last year, an 81% increase since 2008. More than 6,000 permits have been issued and some 34 million acres are leased to oil/gas companies, a land mass equivalent to the state of Florida in size, a spokesperson for the federal agency said.

BLM Director Neil Kornze said that his agency is facilitating “robust and responsible energy development” on public lands. He said the agency’s basic responsibility is to work with local stakeholders to resolve any conflicts between natural and cultural resources.