The Bureau of Land Management (BLM) in Alaska is cautiously moving ahead on a plan that could lead to oil and natural gas leasing in an environmentally sensitive corner of the National Petroleum Reserve-Alaska (NPR-A) by late next year.

The focus of controversy is on the potential impacts of oil and gas development north and east of Teshekpuk Lake, AK, which is located in the northeastern part of the North Slope. BLM has issued a Draft Supplemental Environmental Impact Statement (SEIS), which it began preparing last December, following a ruling in September 2006 by the U.S. District Court for the District of Alaska. The court enjoined the agency from carrying out a lease sale, noting that BLM’s 2005 Northeast NPR-A Amended Integrated Activity Plan/Environmental Impact Statement (IAP/EIS) had failed to adequately address cumulative impacts of oil and gas development (see NGI, Sept. 25, 2006).

BLM used essentially the same alternatives as were in the agency’s amended IAP/EIS in 2005, but using the court’s decision, it expanded its consideration of additional measures that would minimize impacts, and it included results from scientific studies completed since then. In the BLM’s draft SEIS Alternative A, no leasing would be allowed in the disputed area. However, the three action alternatives (Alternatives B, C and D) would allow leasing in all or some of the area.

The Teshekpuk Lake area is considered to have high oil and gas value, but it also is considered of “great importance” for waterfowl (including during the flightless molting period), caribou (for calving and relief from insects), and subsistence (both because of dependence on potentially affected caribou and because of subsistence harvesting on these lands).

“Petroleum in the 4.6-million-acre Northeast NPR-A is important for meeting our nation’s energy demands,” said BLM’s Alaska State Director Tom Lonnie. “This supplemental plan will allow us to consider the lands appropriate for leasing and the restrictions we should place on exploration and development that will result in petroleum production while protecting the area’s important resources.”

Earlier this year, Alaska’s North Slope Borough signed a Memorandum of Understanding with the BLM that gave it the formal status of a cooperating agency for this planning effort. Lonnie said the borough had “contributed valuable information, particularly on public health issues…Their scientists have reviewed and submitted comments that have been used throughout the document.”

The BLM is taking public comments through Oct. 23 on the Draft SEIS. The public comments will determine whether BLM moves ahead with a lease sale for the disputed area, the agency said. 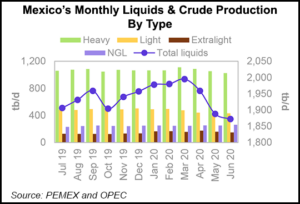 Latin American liquids production is expected to rise 2.27% to 6.19 million b/d this year even as global oil demand has plummeted, according to the latest monthly report issued by the Organization of the Petroleum Exporting Countries (OPEC). The figure does not take into consideration Venezuela, Latin America’s only OPEC member, where oil production has…