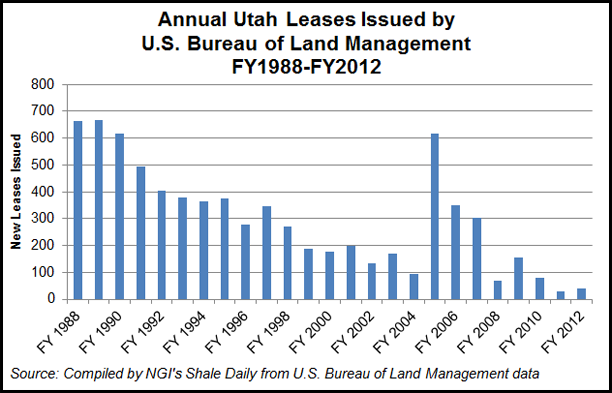 BLM Utah officials said all the offered parcels were sold, and in addition to the bonus bids, the sale netted $56,134 in rental fees and $3,900 in administrative fees for a total of $4.128 million in receipts, which are shared with the state and counties where the leased lands are located.

The industry-designated parcels were mostly in the far southeast corner of the state near BLM’s Moab and Monticello, UT, offices. A Salt Lake City-based BLM spokesperson said some other parcels on U.S. Forest Service lands in central Utah were deferred after previously being designated to be part of this sale.

“All leases are issued with conditions on oil/gas activities to protect the environment,” the BLM spokesperson said. “The protections can include limits on when drilling can occur or restrictions on surface occupancy.” Once an exploration or development plan is submitted for a lease, further environmental analysis is required.

BLM’s Utah office conducts oil and gas lease sales quarterly, and the available parcels are either nominated or requested by the industry or another member of the general public.