The Bureau of Land Management (BLM) took action Thursday to implement proclamations signed by President Trump more than two years ago to trim the size of two national monuments in Utah by more than two million acres, including one in an area of some oil and gas drilling. 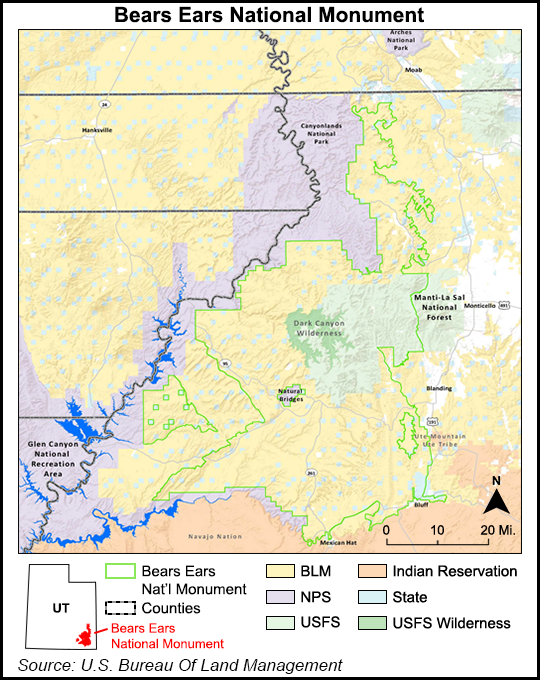 The Obama-era designation of 1.35 million acres of BENM came “over the objections of state and local officials, during a lame duck presidency,” according to BLM, while 1.72 million acres of the GSENM was designated during the Clinton administration “through an abuse of the purpose and spirit of the Antiquities Act, without due consideration to state and local elected officials, or the community, and commenced decades of mistrust with the Federal government.”

Obama’s BENM designation effectively precluded any new leases for mining or oil/gas exploration and development. Opponents of the designation had vowed to work to overturn it even before Trump’s 2017 inauguration, while supporters claimed that the Antiquities Act prevented the reversal. The area has seen mostly conventional but also some unconventional oil and gas drilling. San Juan County also overlays the Paradox Basin, which includes the Cane Creek and Hovenweep shales.

In December 2017, Trump signed a pair of proclamations that collectively trimmed the size of the two national monuments by more than two million acres, including one in an area of some oil and gas drilling, in a move that represented the largest rollback of protected federal land in the nation’s history.

In 2016, Trump signed an executive order ordering the Department of Interior to review any national monument designation of more than 100,000 acres made since Jan. 1, 1996. The original review affected 27 national monuments, but six were later removed. Of the remaining 21, 16 were onshore, and all but Maine’s Katahdin Woods and Waters are in the West. The remaining five are marine monuments offshore.