A final environmental impact statement (FEIS) was released for public comment last Thursday that would allow oil/natural gas drilling on up to nearly 120,000 acres of U.S. Bureau of Land Management (BLM)-managed lands in two counties in northern Utah in the Uintah Basin. BLM noted that mitigation will be a critical part of any final decision on the sizable project. 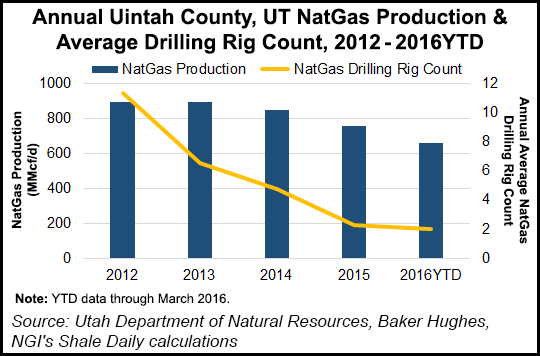 The BLM Vernal field office FEIS was published in the Federal Register, including a preferred alternative that would allow up to 5,750 new oil/gas wells to be drilled as part of the final environmental assessment of the impacts of Newfield Exploration Co.’s proposed infill development project, including four alternatives to that proposal.

Newfield seeks to expand its ongoing oil and natural gas development in the region. The company holds federal, state and private land leases in the area, and the FEIS applies to its plans to develop these leases.

Located south of Myton, UT, in Duchesne and Uintah counties, BLM is seeking public review of Newfield’s Monument Butte Area Oil and Gas Project. The maximum development of the project is estimated to generate 540 Bcf of natural gas, 355 million bbls of oil, and slightly more than 10 million bbls of natural gas liquids during the life of the project. In addition, BLM noted that development of deep gas wells could yield an additional estimated 6.9 Tcf.

Newfield currently operates about 3,395 oil/gas well in the Monument Butte project area, and is proposing to drill about 360 new wells annually until the resource base is fully developed, BLM’s FEIS noted.

“Because of the scale of this project, the final EIS includes a robust suite of mitigation strategies consistent with an earlier Interior Secretary’s order [No. 3330] to bolster mitigation policies and practices in the federal agency’s work, and the BLM’s obligations under the Federal Land Policy and Management Act,” said a BLM spokesperson.

Jenna Whitlock, acting state BLM-Utah director, said that air quality concerns are a primary part of the FEIS. Whitlock cited particularly air pollution concerns in the Uintah Basin and the potential for a nonattainment designation in the area in stressing that “protecting air quality was a primary concern as we developed this EIS.”

The public review period for the FEIS concludes Aug. 8, after which the BLM may release a record of decision for this project.

The U.S. natural gas rig count increased one unit to 77 during the short holiday work week ended Wednesday (Nov. 25), while the overall domestic tally rose sharply on a double-digit increase in the oil patch, according to the latest figures from Baker Hughes Co. (BKR). The United States added 10 rigs overall for the…