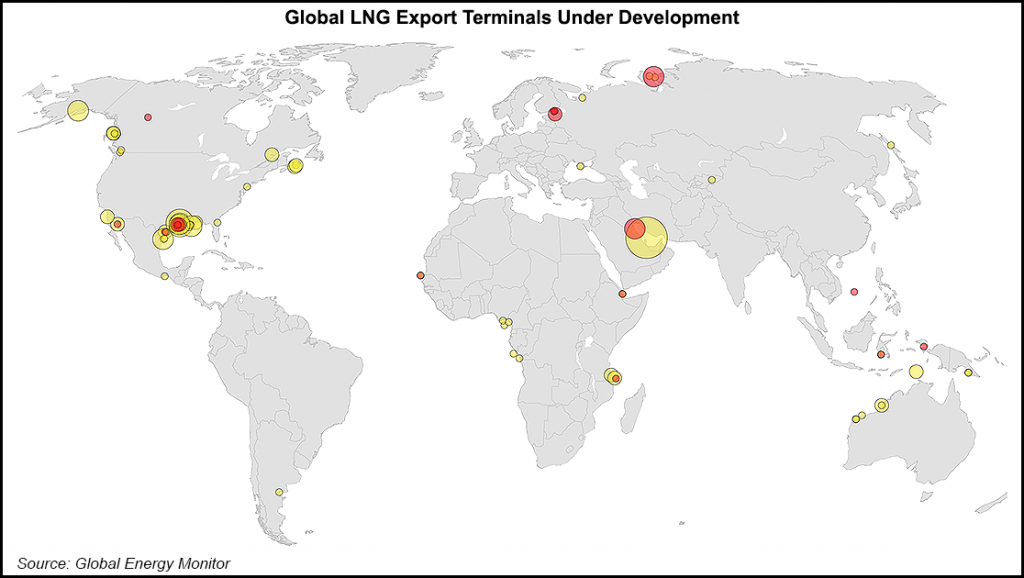 The nonprofit, which tracks energy projects around the world, in a recent report said North American suppliers are particularly vulnerable because of the high cost of production compared to rivals such as Qatar and Russia. The group receives funding from organizations including the Rockefeller Family Fund, the Sierra Club Foundation, and the Sustainable Markets Initiative.

North American LNG suppliers also face competition from renewables, the cost of which have been on the decline.

“With coal-to-gas switching in the power sector the lead driver of gas demand increases…every year of delay that an LNG project experiences means an even tougher competitive environment against renewables, and raises the probability that the project could become obsolete decades before the end of its intended lifespan,” the GEM researchers said.

“While the economic freeze that occurred in the spring and summer of 2020 has now eased due to the ongoing revival of the international economy, the pandemic also revealed deeper concerns about the vulnerability of capital investments for fossil mega-projects in a rapidly transforming political and social environment,” the GEM said.

Still, LNG advocates say the fuel will be essential in the energy transition. A spokesperson for the Center for LNG noted that global demand is expected to grow in part because of the emissions reductions when switched with coal.

“We have seen large and growing markets like India and Vietnam turning to natural gas to help reduce emissions and the momentum is growing,” the spokesperson said. “The U.S. LNG industry is striving to create a clean energy future for all, and the partnership natural gas and renewables have is vital now and in the future for reducing emissions. LNG plays a vital role in ensuring stable baseload power and allowing renewables to grow further in power mixes across the globe. But LNG exports serve more than just power needs, they also provide access to natural gas for heating, manufacturing, and low emissions fuel. As the world strives for a clean energy future, natural gas and LNG will be vital partners.”

Project developers are exploring ways to reduce their greenhouse gas profiles in a number of ways, including carbon capture and sequestration, emissions monitoring/certification and purchasing offsets.

However, other issues have cropped up for facilities that make it to operation, according to the report. Some LNG facilities have reported unplanned outages because of technical problems, safety issues or extreme weather events. For example, Chevron Corp. last year kept part of its Gorgon LNG export facility in Australia offline for months after welding cracks were discovered.

“With massive LNG terminals beginning to look more and more like expensive and fragile white elephants, it is likely that electricity system planners in countries such as Vietnam, Bangladesh, and South Korea will increasingly see renewables not only as an attractive alternative to new LNG on economic grounds, but also as more predictable and secure due to their more flexible deployment and greater overall simplicity,” according to the report.

U.S. developers were hit hard in the Covid-19 pandemic as demand dwindled and funding dried up. A number of projects, including NextDecade’s Rio Grande LNG in Texas and Tellurian Inc.’s Driftwood LNG in Louisiana, delayed making final investment decisions (FID) amid the uncertain market.

While pricing and demand have improved dramatically as economies recover from the pandemic, delays have persisted. Earlier this year, Sempra  Energy said it was likely to push an FID to 2022 for the Port Arthur LNG terminal in Texas.

Other North American projects have been abandoned or put on pause by their sponsors. Earlier this year, the Exelon Corp.-led Annova LNG project in Texas was canceled after failing to rack up any customers. Pembina Pipeline Corp.’s Jordan Cove LNG in Oregon is on hold following a series of regulatory setbacks. Meanwhile, partners Chevron and Woodside Petroleum Ltd. have withdrawn support for the Kitimat LNG project in British Columbia.

“While signs of renewed confidence by LNG financial backers have appeared recently, including a rise in Asia spot market prices, the picture remains uneven,” according to GEM. Researchers noted that 26 export terminals totaling 265 mmty of capacity continue to report “FID or other serious delays.”

That makes up 38% of the 699 mmty under development around the world, according to the report. Of the 26 projects reporting delays, 18 are in North America.