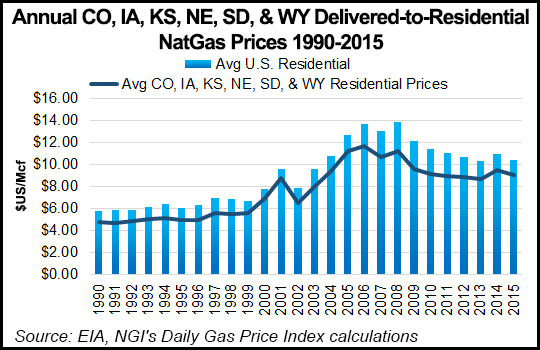 Filed as the first of a two-phase process, Black Hills’ proposal was rejected in Colorado and Nebraska, prompting the company to pull its pending applications in four other states (Iowa, Kansas, South Dakota and Wyoming), Emery said (see Daily GPI, April 28; Oct. 5, 2015). He said the utility applications were seeking approvals in two phases — first setting the regulatory framework and in the second phase submitting specific gas reserves for inclusion.

Colorado and Nebraska regulators decided there was not enough cost-related data to support the customer benefits of the proposed programs, Emery said.

“We’re currently evaluating options on how best to proceed, including filing applications for approval of specific gas reserves,” Emery told analysts. “From a big picture standpoint, we continue to firmly believe that a cost-of-service gas reserve program will provide customers with long-term gas price stability, and long-term lower gas costs.”

In response to an analyst’s question about current upward gas price pressures, Emery said that Black Hills intends to demonstrate to state regulators that “it is the long-term price that matters, it’s not short-term spot prices, but that is much easier said than done. I think the recent uptick in prices is generally favorable to our program.”

Emery said Black Hills intends to sell off some of its non-core oil/gas assets in the third quarter as it continues to exit the exploration and production (E&P) business, while retaining its Piceance Basin and Powder River Basin assets (see Daily GPI, Feb. 5). The Mancos Shale holdings in the Piceance are expected to be part of the utility gas reserve program.

“Right now we are focused on primarily non-operated properties scattered throughout the Rocky Mountain region, and we have a package of those that will be put in an industry wide auction later this month, and we will continue to work on some of those properties,” Emery said. “The Piceance and Powder River are our primary basins, and the Powder is tied to oil prices, so it doesn’t make any sense to fire-sale those properties now.”

Calling the Piceance the company’s “crown jewel,” Emery said that if it cannot be included in a utility gas reserves program, “we will have to consider carefully how best to divest those assets.”

One skeptical analyst asked Emery why Black Hills was not selling its E&P holdings in their entirety to eliminate the ongoing negative impact on earnings.

“We’re a large utility, particularly on the gas side, and we’re integrating a long-term investment opportunity in gas reserves with a utility risk and earnings profile that fits exactly with that strategy, so it is a significant investment opportunity for decades to come,” said Emery. The rest of the E&P business, he agreed, doesn’t fit with the utility business and Black Hills will sell it over time.

At the same time, he said the company wants to “integrate a world class shale property” into the utilities for the benefits of customers and shareholders. “Right now, it is the sweet spot of our strategy, and a very huge, long-term investment opportunity.”

Black Hills recently added Teresa Taylor to its Board of Directors, effective Sept. 1. CEO and owner of Blue Valley Advisors LLC, Taylor is a past director of Columbia Pipeline Group Inc. and NiSource, and is the former COO of Qwest Communications in Denver.