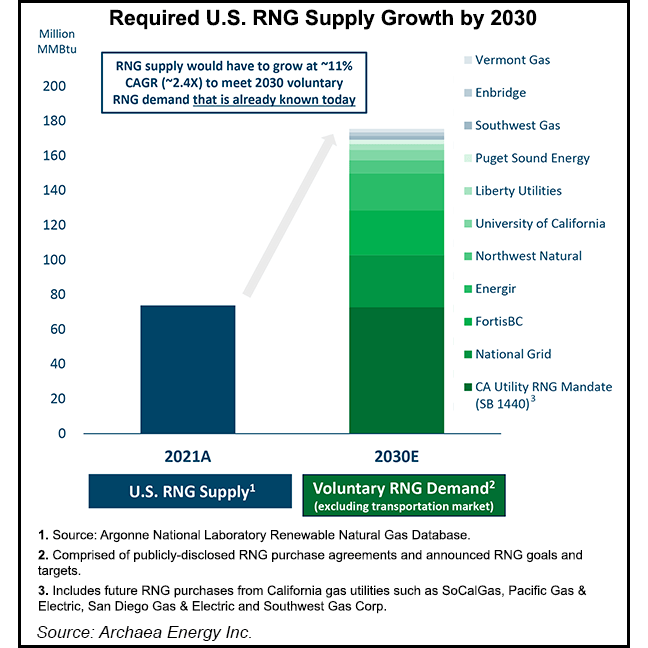 The Rapid City, SD-based utility filed a proposal with the Colorado Public Utilities Commission (PUC) for a program that would offer customers the opportunity to offset 100% of emissions associated with their own natural gas usage through carbon offset credits and RNG attributes.

While Black Hills continues to view natural gas as playing a “critical role in a clean energy future,” said CEO Linn Evans, Colorado natural gas customers have told the utility they are “increasingly looking to us for sustainable and cost-effective options to help reduce the carbon footprint.”

In the current proposal, voluntary participants would purchase blocks of RNG at $5/block. A single block would cover approximately 25% of the average residential customer’s monthly supply, or about 20.5 therms of natural gas.

The four-year pilot program would run from 2023 through 2026, pending Colorado PUC approval, with the potential to expand the program to more Black Hills customers.

Last month, Black Hills Energy said it is aiming to reduce its greenhouse gas emissions by 90% from 2005 levels by 2030, which could result in 79% of the utility’s Colorado customers receiving electricity from carbon-free sources.

Black Hills serves 1.3 million natural gas and electric customers across eight states. The company said it plans to submit a proposal for the pilot program to regulators in Kansas and Nebraska later this summer, followed by filings in Arkansas, Iowa and Wyoming by 2023.

RNG Programs on the Rise

A 2019 report from the American Gas Association (AGA) estimated that as utilities aim for net-zero emissions by 2050, leveraging renewable and low-carbon gasses could reduce emissions by up to 59% compared to business as usual.

Since 2013, more than 12 utilities have submitted proposals to state regulators for voluntary RNG, carbon offset programs or tariffs in 14 states, according to the report.

“The program will not impact the utility’s own carbon emissions,” a PNG spokesperson told NGI. The program is available to residential and small and medium businesses as an “option to address their environmental impact and natural gas-based carbon footprint.”