A long-standing effort to create a multi-state, multi-utility natural gas reserves program centered on Piceance Basin reserves continues for Rapid City, SD-based Black Hills Corp. but the program will not move ahead this year and its ultimate fate is still uncertain, executives said Friday. 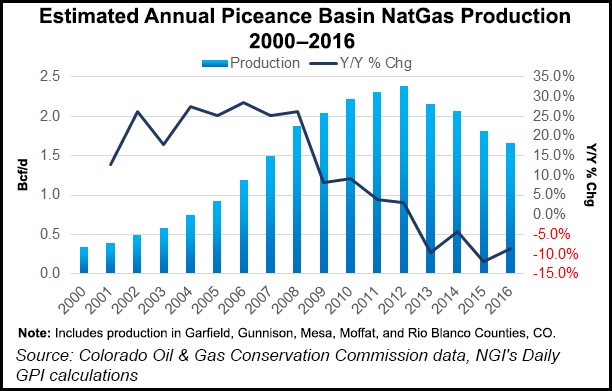 CEO David Emery said low natural gas prices make the proposed cost-of-service gas program politically unattractive for regulators when they view the continuing macro-market conditions for oil and gas. The utility asked regulators in several states to approve the gas reserves acquisition program to support supplies, but last year, applications in six states were either rejected by regulators or aborted by local utilities.

Although Black Hills has been transitioning away from a modest exploration and production (E&P) business, it continues to hold Piceance gas assets that could form the basis of the proposed cost-of-service program.

“The political considerations associated with sustained low natural gas price environment make it unlikely that we would be successful in obtaining regulatory approval for a utility cost of service gas program in the near future,” Emery said. “We’re currently evaluating our options on how best to proceed with the cost of service gas program, but it’s very likely we will not file for approval of a program prior to year-end.

“We’re also considering options on how to preserve and possibly capture the potential upside opportunity provided by our natural gas assets in the Piceance Basin, while we continue to transition away from the traditional oil and gas exploration and production business.”

“Second quarter volumes sold decreased as oil and gas production declined from the prior year due to divestitures and natural production declines,” CFO Richard Kinzley said.”Also, we are limiting production in our Piceance properties to meet only the minimum daily quantity requirements of our gas processing contract.”

Emery said Black Hills is not prepared to continue to sustain E&P losses, albeit smaller, in order to hang on to the Piceance assets and the prospects for a reserves program. “We do fully intend to continue our transition away from the traditional exploration and production business,” he said.

In terms of possible options, Emery said there’s “always opportunities,” including farming out assets to another company. He said it was not a high priority, “but it’s certainly something that’s possible. There’s other alternatives, and obviously, the sale is the most obvious one, but not necessarily the one that would capture the most value.”

Emery said there are still potential partners for a gas reserves program, but they want assurances the potential for regulatory approvals in individual states would be a realistic possibility.

“There are companies that would love to partner with us, provided we could recommend a program that would get approval” by state regulators. For now, Black Hills is “concerned that we wouldn’t be able to recommend one that would receive regulatory approval. So we haven’t spent any more time working out a lot of real specific details with a potential partner. But we do still have parties who would be interested in partnering with us if we were to go ahead with the program.”