Black Diamond Gathering LLC, a joint venture (JV) of Noble Midstream Partners LP and Greenfield Midstream LLC, has doubled its crude gathering volumes in the Denver Julesburg (DJ) Basin with a new deal, and is considering a stake in another oil pipeline that moves volumes from the Rockies to storage in Cushing, OK. 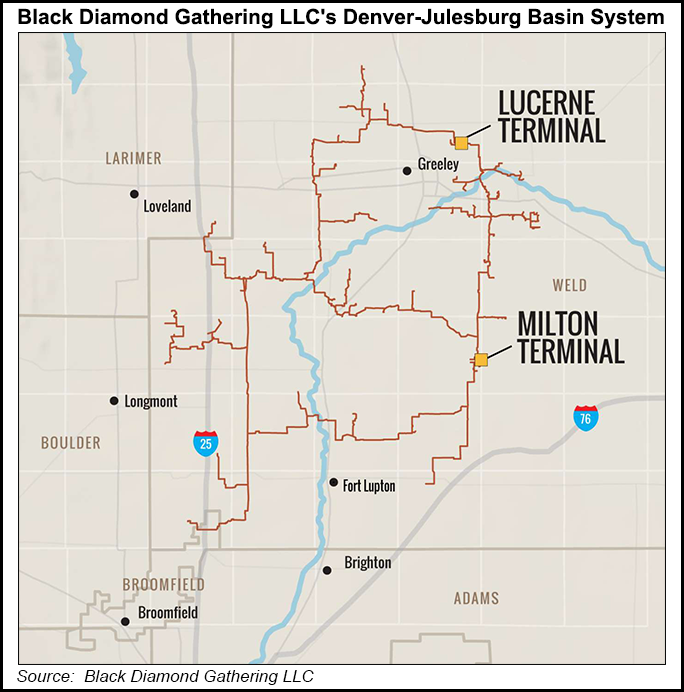 The gathering agreement also includes more than 750 potential drilling locations in southern Weld County, CO, and one rig, bringing the total rig count on the acreage to seven. The company expects initial well connections from the Verdad assets to take place in early 2020.

The deal will “enhance the resiliency and long-term potential” of the Black Diamond system, said Noble CEO Brent Smolik.

The DJ is considered an attractive investment, but production plans often are complicated by midstream constraints and volatile natural gas prices.

In addition to Black Diamond’s acreage boost, the company also made shipping commitments, alongside Noble Energy Inc., as part of a recent open season held by Saddlehorn Pipeline Co. LLC, which could turn into a 20% stake in the Saddlehorn crude pipeline.

“Saddlehorn is an important long-haul outlet from the DJ and Powder River Basins with premier midstream equity partners and commitments from high-quality producers,” Smolik said.

If Black Diamond takes the stake in Saddlehorn, Magellan and Plains would both lower their stakes while Western would retain its 20% stake. Whether or not Black Diamond ends up with an ownership interest in the crude line, the company would benefit from lower tariffs on the long-haul pipeline as a result of the commitment it made in the open season, the company said. Noble Energy, its majority owner, would also see lower tariffs.