A bill that would put in place a three-year moratorium on hydraulic fracturing (fracking) has been approved by one branch of the legislature in Maryland, a state that has potential natural gas deposits only in its two westernmost counties and has seen virtually no interest in developing those limited assets. 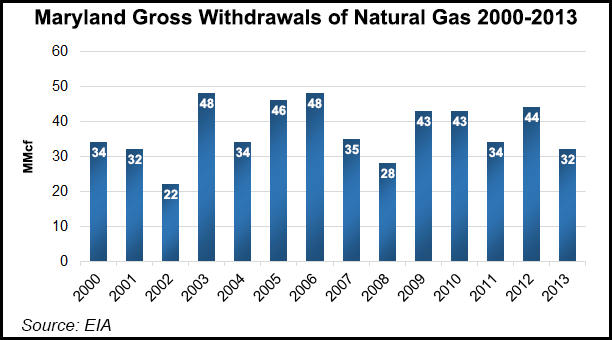 HB 449, which would prohibit the Maryland Department of Environment (MDE) from issuing permits to frack oil and natural gas wells until April 30, 2018, was approved by the Maryland House in a 93-45 vote Tuesday and now moves to the Senate. The bill also calls for the creation of a panel, with members appointed by the president of the Senate and the speaker of the House, that would study potential public health and environmental impacts of fracking, and report back Maryland’s governor and legislators by Jan. 1, 2018.

Maryland’s Senate has passed over to the House a bill (SB 458) that would hold energy companies liable “for injury, death, or loss to person or property” caused by fracking, and would make chemicals used in fracking admissible as evidence in actions brought against energy companies. The bill is scheduled to be debated in the House beginning April 1.

If approved by both houses, each bill would still require the signature of Gov. Larry Hogan before they would become law.

Only two counties in Maryland — Garrett and Allegany in the western panhandle — overlie the Marcellus Shale, which the U.S. Geological Survey estimates could contain as much as 2.383 Tcf of technically recoverable natural gas. The state’s portion of the Marcellus can be developed safely, as long as oil and natural gas operators agree to use best practices and the state embraces vigorous rules for well monitoring, inspection and enforcement, a pair of state agencies said last year (see Shale Daily, Nov. 26, 2014).

Two years ago, Robert Summers, secretary of the MDE, declared the state’s Marcellus Shale industry had ended even before it began (see Shale Daily, Jan. 25, 2013).