A big surge in oil-directed drilling, headlined by gains in the Permian Basin and Eagle Ford Shale, helped lift the U.S. rig count 14 units higher to 728 during the week ended Friday (May 20), according to the latest figures published by Baker Hughes Co. (BKR). 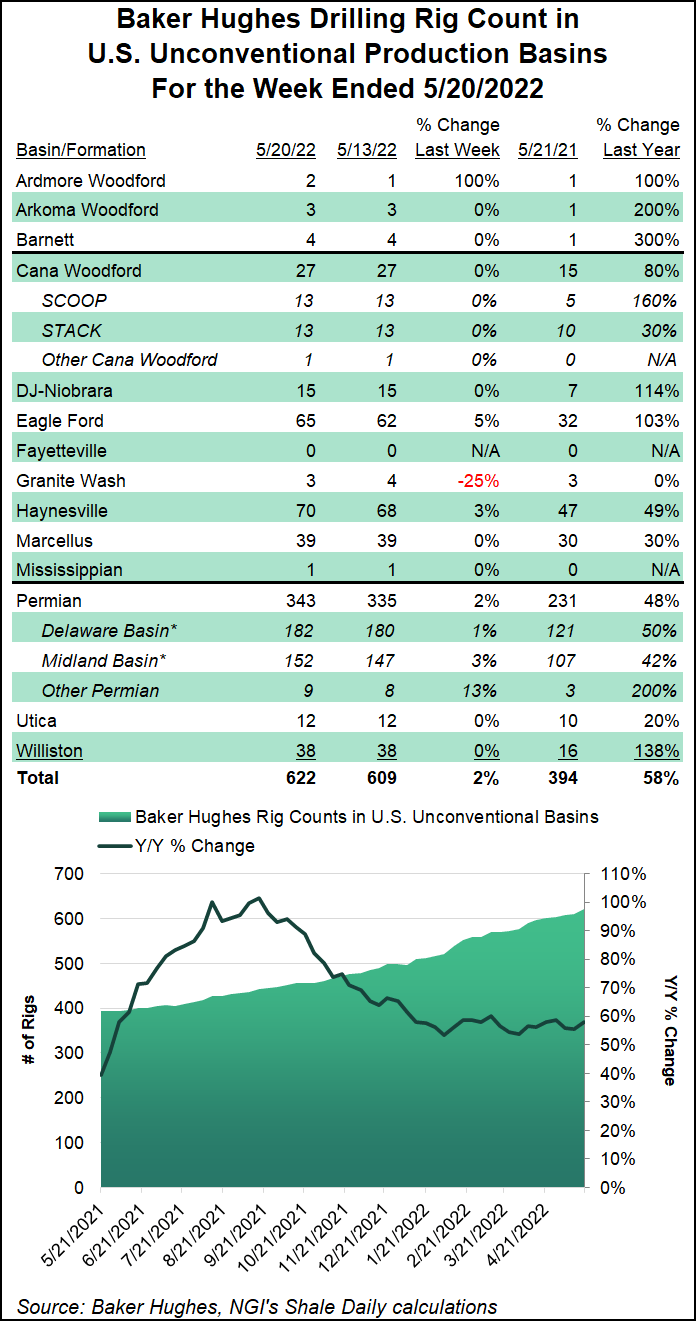 Thirteen oil-directed rigs were added in the United States for the week, along with one natural gas-directed rig. The 728 active U.S. rigs as of Friday compares with 455 rigs running in the year-earlier period, according to the BKR numbers, which are partly based on data from Enverus.

All of the net gains for the week were in land drilling; the Gulf of Mexico held steady at 17 rigs for the period. Thirteen horizontal rigs were added, along with one directional unit, while vertical rigs were unchanged at 25.

The Canadian rig count was flat week/week at 88, with a three-rig increase in oil-directed drilling offsetting a decline of three natural gas-directed rigs. The Canadian count ended the week 30 units ahead of its year-earlier total of 58.

Counting by major drilling region, the Permian led with a net increase of eight rigs week/week, growing its total to 343, versus 231 in the year-ago period. The Eagle Ford added three rigs for the period, raising its total to 65, up from 32 a year ago.

Elsewhere among plays, the Haynesville Shale added two rigs, while the Ardmore Woodford added one. The Granite Wash posted a one-rig decline week/week.

Counting by state, Texas accounted for the lion’s share of net gains for the period, adding 12 rigs to up its tally to 357. That’s up from 214 in the year-earlier period. Louisiana and Oklahoma each added one rig to their respective totals, BKR data show.

U.S. oilfield services (OFS) and equipment sector employment reached an estimated 622,309 jobs in April, its highest level since September, according to the Energy Workforce & Technology Council.

“Oil and gas demand has continued to increase, and global demand will continue to rise as more countries cut off imports of Russian energy resources,” said CEO Leslie Beyer.

Meanwhile, the latest Energy Information Administration (EIA) data showed U.S. producers boosting output back up to the 2022 peak, but with domestic demand also expected to continue climbing as Americans increase travel during the summer months.

Production for the period ended May 13 totaled 11.9 million b/d, up by 100,000 b/d from the prior week. That put output on par with the highs of this year reached in April, according to EIA’s latest Weekly Petroleum Status Report.