Continuing a months-long upturn, oil and natural gas production from the nation’s seven most prolific unconventional plays is expected to move higher in April compared with the previous month, according to data from the Energy Information Administration (EIA). 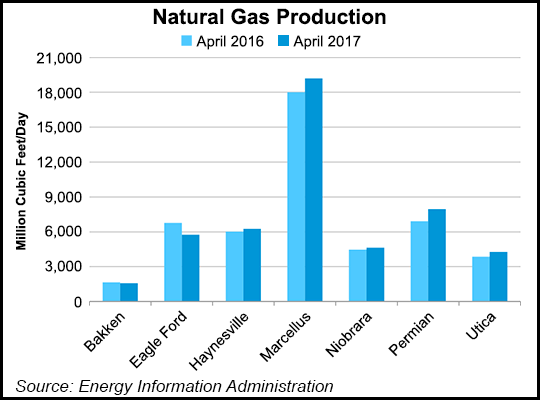 The Bakken, Eagle Ford, Haynesville, Marcellus, Niobrara, Permian and Utica plays will produce an estimated total of 49.62 Bcf/d of natural gas in April, up from 49.06 Bcf/d in March, according to EIA’s latest Drilling Productivity Report (DPR), which was released Monday. Gas production out of the plays, which had been on a downward trend for more than a year, returned to the upside in January and is expected to be up this month compared to February, according to EIA.

Total oil production out of the seven plays will be an estimated 4.96 million b/d in April, compared with an 4.85 million b/d in March, according to the DPR.

The productivity of new oil and natural gas wells in the plays is expected to increase slightly in April. On a rig-weighted average basis, oil production per rig will be 720 b/d, compared to 711 b/d this month, according to the DPR. New-well gas production per rig in the plays will increase marginally to an estimated 3.52 MMcf/d in April, EIA said.

Drilled but uncompleted (DUC) well counts as of the end of February totaled 4,515 in the four oil-dominant regions — Permian, Bakken, Eagle Ford and Niobrara — an increase of 90 from January, EIA said. There also were 928 DUCs in the three gas-dominant regions — Haynesville, Marcellus and Utica — one more than in January.