Production of both oil and natural gas out of the most prolific U.S. onshore unconventional plays will increase slightly in December compared with this month, continuing a longstanding upward trend, according to the Energy Information Administration (EIA). 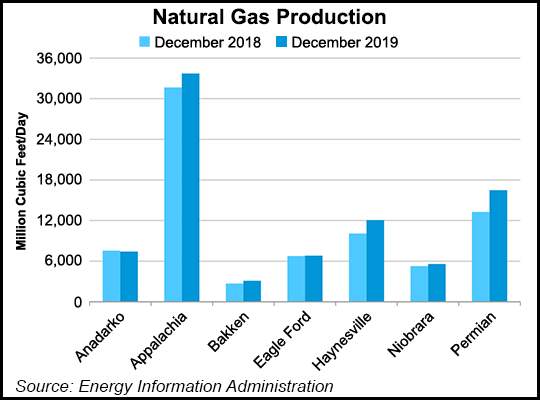 Total natural gas production from the seven plays — the Anadarko, Appalachian and Permian basins, and the Bakken, Eagle Ford, Haynesville and Niobrara formations — is expected to increase by 263 MMcf (0.3%) in December from November, EIA said in its latest Drilling Productivity Report (DPR), which was released Monday.

About 40% (546) of all new wells completed (1,373) in DPR regions in October were in the Permian, as were about 55% of the active drilling rig fleets, according to DPR author Josef Lieskovsky. While there has been a year/year decline in Permian rig count, “the productivity is increasing — new oil and gas pipeline infrastructure is helping,” Lieskovsky said.

The productivity of new gas wells in the Big Seven plays is expected to decrease by 100 Mcf/d in December to 4.16 MMcf/d. At the same time, new well oil production per rig is expected to increase marginally during the month to 824 b/d.