Production from the seven most prolific U.S. shale and tight oil regions in November is expected to reach 43.28 Bcf/d of natural gas (up 1.4% from October ) and 5.14 million b/d of crude oil (up 2.4% from this month), according to the Energy Information Administration (EIA). 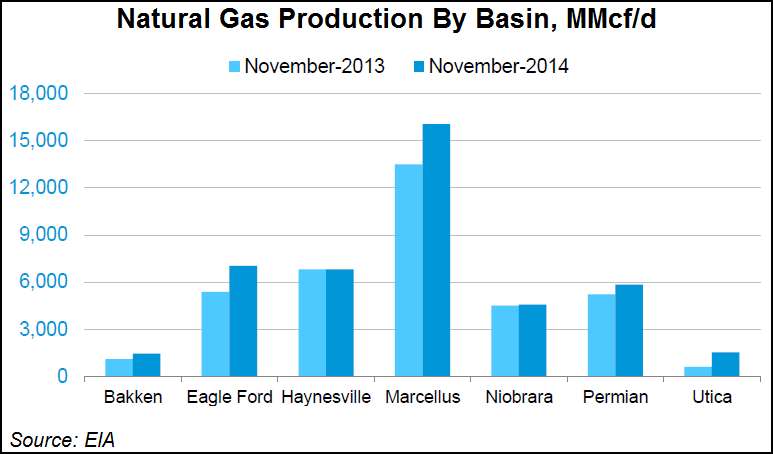 Significant increases on the oil production side will be confined to the three biggest producers, EIA said. The Permian will increase 42,000 b/d to reach 1.81 million b/d in November, the Eagle Ford will increase 35,000 b/d to 1.61 million b/d, and the Bakken will add 29,000 b/d to reach 1.19 million b/d. All three came in above their three-year average month/month production growth numbers, but a recent market downturn could have companies delaying announcing 2015 production guidance, according to analysts at Wells Fargo Securities.

“Net-net, all regions are unquestionably exhibiting healthy production growth — however, with the recent rout in crude prices, we anticipate Q3 earnings calls will focus on operators’ budgets, and thus, the pace of development for 2015,” said analysts David Tameron and Gordon Douthat. “Unfortunately, we only expect a handful of companies to provide official guidance for 2015 as most will likely wait until late 2014/early 2015 before they discuss next year’s plans in detail.”

Three other plays — the Niobrara, Utica and Marcellus — will increase production by a combined 12,000 b/d, and the Haynesville’s oil production will stay flat at 57,000 b/d, according to the EIA report.