Natural gas and oil production from the nation’s seven largest unconventional plays is likely to decline once again next month compared with April figures, according to the Energy Information Administration (EIA). 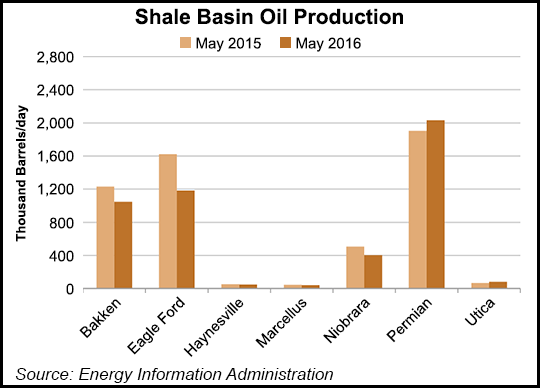 Total oil production out of the plays will be an estimated 4.84 million b/d in May, compared with 4.95 million b/d in April, according to EIA’s latest Drilling Productivity Report (DPR).

Total natural gas production from the plays will be an estimated 45.93 Bcf/d in May, a 491 MMcf/d decline from 46.42 Bcf/d this month, EIA said. That’s about the same month-to-month decline EIA had forecast for in each of its two previous DPRs (see Shale Daily, March 7; Feb. 9).

The biggest decline once again is expected to come in the Eagle Ford Shale, where EIA is forecasting production of 6.19 Bcf/d in May, down 213 MMcf/d from 6.41 Bcf/d this month, but declines are forecast for six of the seven plays analyzed in the DPR.

The productivity of new oil wells in the plays is expected to remain virtually unchanged in May. On a rig-weighted average basis, oil production per rig will be 532 b/d, compared to 541 b/d this month, according to the DPR. At the same time, new-well gas production per rig in the plays will increase to a combined 2.84 MMcf/d in May, compared to 2.69 MMcf/d this month.