Natural gas traders flipped the script on futures pricing Tuesday, with the near-term prospects of another small storage injection stealing the limelight — at least temporarily — from former Hurricane Ida’s crushing toll on demand. The October Nymex contract plunged as much as 9.0 cents lower day/day, but it found support and rebounded sharply to a $4.377/MMBtu settlement, up 7.2 cents from Monday’s close. The November contract settled at $4.425, marking a gain of 6.6 cents on the day. 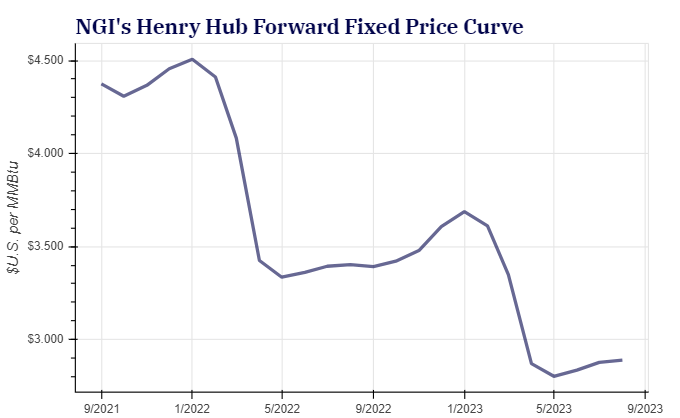 Volatility was prevalent along the Nymex futures curve Tuesday as the energy industry continued to assess the storm’s impact. Bespoke Weather Services said the wild swings come from what it sees as some bearish near-term trends, relative to what the market had been seeing. In addition to the massive power outages, Ida also was ushering in cooler weather from the Midwest to the East.

These unsupportive factors are bucking up against the overall big picture, which, even with things not as bullish, still remains supportive, according to the firm.

“It is often said that playing in the natural gas market is not for the faint of heart,” Bespoke chief analyst Brian Lovern said. “That has been the case recently, especially the last couple of sessions, which have been at least as wild as what we often see in a winter season.”

Out Of Whack Balances

On the supply side, it appeared Tuesday that most Gulf of Mexico (GOM) oil and gas production remained offline. The Bureau of Safety and Environmental Enforcement in a midday update said operator reports indicated that around 94.47% of the gas production in the GOM remained shut in. About 93.69% of the current oil production in GOM also was shuttered.

Natural gas processors and pipeline operators also continued to assess the damage. Houston-based Enterprise Product Partners LP indicated its assets on the Louisiana coast generally “did not sustain material damage.” However, a natural gas liquids fractionator and some pipeline pump stations were expected to have a delayed restart.

Meanwhile, Entergy Corp. at midday Tuesday said 787,958 Louisiana customers were without power, concentrated in Orleans Parish, home to New Orleans. There also were 22,216 customers without power in Mississippi.

The utility indicated that those in the hardest hit areas could experience power outages for weeks. Most, however, would see their electricity restored sooner.

“It goes without saying that impacts to the natural gas market are inconsequential in comparison to the effect of such a storm on individuals,” said Mobius Risk Group. “Progressing through the balance of the week, it will be important to track the pace at which both offshore production and nuke capacity come back online, relative to the restoration of power to homes and businesses.”

The Houston firm said thus far, the current week’s storage data remained “definitely supportive of price.” Taking into account the return of supply/demand to more normal, pre-Ida levels, “salt storage data from Tuesday-Friday is expected to be a key barometer for the market,” according to Mobius.

Meanwhile, the Energy Information Administration (EIA) is scheduled to release the next weekly inventory report on Thursday, offering yet another glimpse into the deteriorating supply picture ahead of winter. Expectations were clustering around a build in the upper 20s Bcf, which would fall short of historical levels and expand already plump deficits.

Looking ahead, though, weather models were pointing to significantly cooler weather across much of the United States in the coming days.

NatGasWeather said several weather systems were seen impacting the northern United States, while rains from Ida spread across the East. This should usher in more fall-like conditions and put the kibosh on any remaining sweltering summer weather in the region.

There are still pockets of heat, though. Hot high pressure was forecast to continue producing daytime temperatures in the 90s to 100s from California to Texas , according to NatGasWeather. The heat in Texas is especially noteworthy since any sustained strength in power burns would leave less gas available for storage. At the same time, getting a firm grasp on storage dynamics in the South Central region is difficult, as gas flow data on Texas intrastate pipelines is not publicly available.

Though supply may recover rather quickly, Bespoke noted that some processing plants likely have power issues as well, which could keep production offline longer than otherwise expected. “Much as we would love to have a great idea where near-term price action will take us, that is a difficult call, with choppiness likely to continue,” Lovern said. “We feel it will remain a ‘buy the dip’ market, however, with risks over the next couple of months skewed to the upside, pending how weather shapes up once we get to October and November.”

Spot gas prices were mixed on Tuesday, with heat continuing unabated in Texas but cooler weather pretty much everywhere else across the country.

In the West, the remnants of Tropical Storm Nora were bringing much needed rain to the region. The National Weather Service said widespread thunderstorms and showers were expected over the Southwest and adjacent areas of the Great Basin and central Rockies through Thursday. The storm initially made landfall in Mexico over the past weekend.

Along with the downpours, cooler temperatures sent gas prices falling across the region. Transwestern San Juan spot gas dropped 14.0 cents to average $3.985. KRGT Del Pool was down 50.0 cents to $5.250.