For the Big Oil majors, the portfolios are shifting considerably over the next decade toward natural gas and low breakeven oil, but they also are eyeing more penetration in renewables as investor sentiment toward carbon hardens, Wood Mackenzie researchers said Monday. 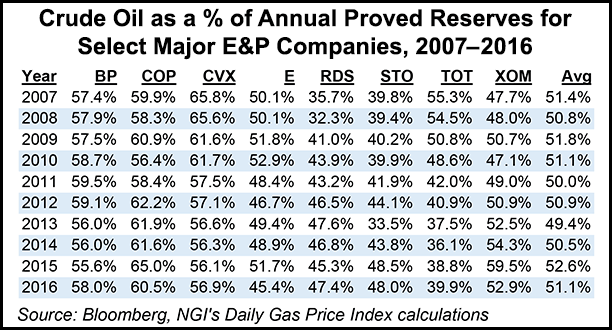 “The benefits of achieving first-mover advantage will have to be weighed up against the danger of value destruction from an overly aggressive growth strategy” that poses a threat to legacy oil and gas operations. “Yet leave it too late and the best opportunities may disappear and entry costs may be much higher,” the research team said in the report, “Could Renewables be the Majors’ Next Big Thing?”

Researchers took a closer look at the value proposition in wind and solar, as well as the pace of the shift to renewables to 2035.

“The growth opportunity in renewables cannot be ignored,” said Wood Mackenzie’s Tom Ellacott, senior vice president of Research, Corporate Analysis. “We forecast average annual growth rates of 6% for wind and 11% for solar over the next 20 years. Renewables will satisfy only 1% of the world’s energy needs in 2017 but will have captured a much bigger slice of the global energy market by the middle of the next decade, as oil and gas demand grow.”

The value proposition is competitive versus some upstream investments, he said. Returns rank favorably with many of the majors pre-sanction long-life developments, the most comparable upstream asset class. The long-life nature of wind and solar projects and stable cash flow visibility also could provide needed support for dividends.

Leading the way in shaping strategies to establish a presence in the renewables market are the European-based majors, according to Wood Mackenzie.

For example, the CEO of France’s Total SA has made no bones about his desire to boost the major’s renewables presence. Patrick Pouyanne said last year that Total would invest 20% of its assets into low-carbon businesses over the next 20 years. Pouyanne, who views the revamp not only as a climate change catalyst but as a strategic investment, said, “There are new areas over the next 20 years beyond oil and gas that we think can be profitable.”

Likewise, Norway’s Statoil ASA plans to increase its renewables investments to 15-20% of total spend by 2030 from around 5% today. Italy’s Eni SpA in 2015 created the Energy Solutions division with a goal to promote renewable energy in countries in which it operates and to stimulate technology research. Eni’s commitment, particularly solar energy, spans three decades.

London-based BP plc, the largest natural gas marketer in North America, at one time was the wind energy leader in the United States, and it continues to make strategic renewables investments. At BP’s annual meeting in May, CEO Bob Dudley said the company would continue to shift to natural gas while eyeing a lower carbon world. BP recently bought a U.S. plant to help commercialize the next generation of biofuels, and it secured a long-term supply of biojet — a sustainable aviation fuel — in a deal with Fulcrum BioEnergy.

Overall, offshore wind “may be the most attractive route to organic growth in the near-term,” said Wood Mackenzie’s researchers. “It offers scale and scalability on a par with upstream mega-projects. Solar is more fragmented and competitive, but Total has used mergers and acquisitions to establish early-mover advantage.”

Wood Mackenzie expects capital increasingly to be diverted from upstream to build positions in wind and solar. Renewables could account for more than 20% of total capital allocation for the most active players post-2030. However, wind and solar alone won’t transform growth prospects for the peer group as a whole.

“The scale of the opportunity is simply not there on our forecasts for solar and wind, at least not in the next 20 years,” Ellacott said. “We estimate spend of $350 billion on wind and solar out to 2035 is needed for the majors to replicate the 12% market share they hold in oil and gas. But even this bull scenario would lift renewables to just 6.5% of the majors’ production in 20 years time.”