Big Oil majors BP plc, Chevron Corp., ConocoPhillips, ExxonMobil Corp. and Royal Dutch Shell plc are being sued by San Francisco and Oakland to force the operators to pay for the cost of protecting Northern California from rising sea levels and the effects of climate change. 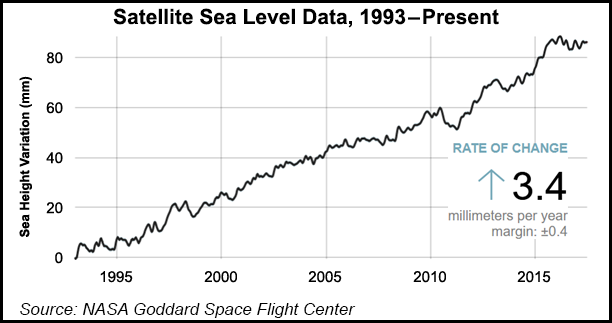 The separate lawsuits, which do not seek specific financial compensation, were filed Tuesday in state court in San Francisco and Alameda counties. San Francisco’s lawsuit projected that long-term improvements to the city’s seawall would cost an estimated $5 billion.

“These fossil fuel companies profited handsomely for decades while knowing they were putting the fate of our cities at risk,” said San Francisco City Attorney Dennis Herrera. “Instead of owning up to it, they copied a page from the Big Tobacco playbook. They launched a multi-million dollar disinformation campaign to deny and discredit what was clear even to their own scientists: global warming is real, and their product is a huge part of the problem.”

Oakland City Attorney Barbara J. Parker, whose city sits across from San Francisco on the East Bay, said the laws were “clear that the defendants are responsible for the consequences of their reckless and disastrous actions. The harm to our cities has commenced and will only get worse.”

The attorneys cited documents they claim show that the producers knew about the risks of climate change caused by fossil fuel emissions but chose to sow doubts publicly about it.

“Reducing greenhouse gas emissions is a global issue that requires global engagement and action,” Chevron spokeswoman Melissa Ritchie said. “Should this litigation proceed, it will only serve special interests at the expense of broader policy, regulatory, and economic priorities.”

Chevron welcomes opportunities to fight climate change, but the lawsuits are not constructive, it said.

“Chevron welcomes serious attempts to address the issue of climate change, but these suits do not do that,” the company stated. “Reducing greenhouse gas emissions is a global issue that requires global engagement and action. Should this litigation proceed, it will only serve special interests at the expense of broader policy, regulatory and economic priorities.”

ExxonMobil, which is in the midst of a federal lawsuit and related litigation initially spearheaded by New York’s attorney general about how its operations may impact climate change, called into question the validity of the California lawsuits.

“The claims in these lawsuits are without merit,” said an ExxonMobil spokesman. “We will vigorously defend ourselves against them.”

The plaintiffs in these lawsuits “may have overplayed their hand by moving their fight against climate change from the court of public opinion to a court of law,” said attorney Nicholas S. Preservati of Spilman Thomas & Battle in Charleston, WV. “The plaintiffs must now actually substantiate their claims that manmade carbon emissions are the root cause of climate change.

“Contrary to the allegations in the lawsuit, sea levels are lower now than they were in September 2015 according to NASA,” he said. “In addition, the plaintiffs will have a difficult time proving damages from rising sea levels, since NASA records show less than a 3.5-inch increase in sea levels over the past 25 years.”

In addition, the plaintiffs may have to prove “the Arctic ice melt is the result of manmade carbon emissions instead of the 1,100 mile string of volcanoes (Gakkel Ridge) that are releasing heat and methane beneath the Arctic Ocean,” Preservati said. “While there are many hurdles facing the plaintiffs, this lawsuit may ultimately fall under its own weight as the plaintiffs should be required to join all emitters of carbon as indispensable parties.”

A related case is underway against ExxonMobil. In a first of its kind lawsuit filed against the company last year, Judge Mark L. Wolf of the U.S. District Court, District of Massachusetts, earlier this month dismissed in part claims by the Conservation Law Foundation (CLF) concerning climate change impacts.

CLF’s lawsuit asserts several things, including that ExxonMobil’s Everett oil transfer and storage facility in Boston Harbor has failed to comply with its National Pollutant Discharge Elimination System permit and the U.S. Clean Water Act. The lawsuit also claims the marine terminal has not been sufficiently upgraded to handle climate change impacts. The lawsuit is Conservation Law Foundation v. ExxonMobil, No. CV-16:11950.

Wolf allowed the lawsuit to continue, but CLF was ordered to remove the climate change references. The judge wrote that he wanted to avoid the “Scopes Monkey Trial of the 21st Century,” referring to the famous 1925 trial about whether evolution should be taught in Tennessee schools. The trial devolved into a debate about human origin.

References have to stripped out regarding harm caused by climate change that would occur in 2050 or later. Material to the case is whether there is a foreseeable risk of substantial change in sea level, Wolf said. However, it is not important whether the cause of the sea level change is because of “warming of the atmosphere or a Noah’s Ark phenomenon.”

Click here to listen to the latest episode of NGI’s Hub & Flow podcast in which NGI senior editor Christopher Lenton talks about what the U.S. election might mean for the Mexican natural gas market.  The outcome of the U.S. presidential election will have wide-ranging impacts across the United States and its energy sector. But…