Environmental questions and high costs for water have created a big headache for unconventional oil and gas producers, but it won’t take long before those problems are turned into opportunities for other businesses, according to industry executives. 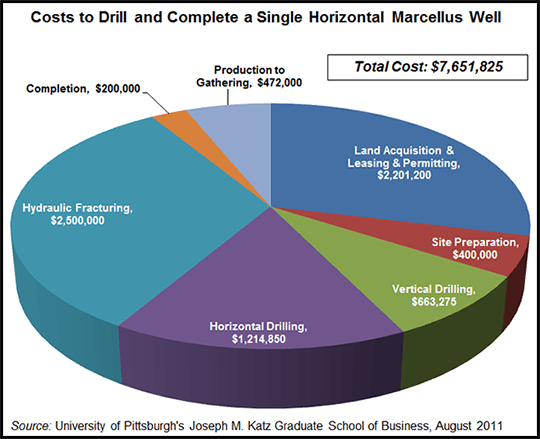 Drillers have cracked the code to open up tight rock and sand in a matter of days instead of weeks, but they’ve yet to figure out a way to do it cost effectively and efficiently without water, said executives.

Hydraulic fracturing (fracking), the key that opened the shales, requires a lot of water, which is more often than not still transported to a well site by truck, said Southwestern Energy Co. CEO Steve Mueller. The costs of just transporting the water to the site — before drilling begins — are enormous.

A typical Marcellus Shale well costs Southwestern an estimated $6 million, he said. Of that, “about $1.5 million is just moving water on that well. So if you could actually get rid of that, then you’d save quite a bit of money.”

“There are some new technologies out there that don’t frack with water, specifically propane or some kind of energized frack with CO2 [carbon dioxide] or nitrogen, but today they don’t give the same kind of frack that we need to have, and the cost of them is actually much more expensive today than what we’re doing,” said Mueller.

“I ought to put that in the ‘holy grail’ of what we’re trying to do as an industry is to find that” method to reduce water use.

Bobby Tudor, whose investment firm has been evaluating the energy industry for more than five years, said finding the solution to the water problem already is bearing fruit.

“When the industry faces a big problem typically there is a profit opportunity for somebody somewhere,” the TPH chief said. “This is a big issue. One of the interesting things that we’ve seen is a flood of capital toward this problem, whether from an exploration services company or from start-ups.”

Tudor pointed to the recent announcement by Waste Connections Inc., which agreed to pay about $1.3 billion to buy and expand privately held R360 Environmental Solutions Inc. Waste Connections, which provides traditional solid waste collection, transfer, disposal and recycling services, would have access through R360 to energy company waste hauling and recycling in the Permian Basin, as well as the Bakken and Eagle Ford shales.

“The great thing about this country is that the service businesses are going to see a lot of technology, manpower and smart minds put toward solving this problem,” said Tudor. The Waste Connections purchase is “interesting because it is a very traditional company want to invest and be part of solving a problem.”

The “community aspect is enormous” when it comes to fracking issues, said Yeager. “It’s something that is not only part of our tactics, but it’s ingrained into everything we do. Every field employee, our land people, are trained in this…It’s the very nature of our business in how it’s run. We’re trying our best to do every single thing we can…

“The U.S. is blessed with royalty owners…If you go to Europe, you don’t have that. If you go to Australia, you don’t have that…South America…We start off with a partnership there that’s is really important. And in the states you work in it’s really important. We’ve chosen where we want to be and where we don’t want to be. We see every small tactical thing we can to to improve, to get it right.”

Mueller said a lot of progress has been made in the past three to four years but more still needs to be done to ensure that stakeholders believe the industry is a responsible partner.

“If we have this discussion, we can do it,” said Mueller. “Each community is a little different, the geography, how it’s laid out. Three years ago it was difficult to get a discussion. In most places today, we can get that discussion. As an industry, we have to be dedicated not just to our company.”

Groups such as the Marcellus Shale Coalition provide a forum for stakeholders and producers to work on solutions, said the Southwestern CEO. A recent drilling construction code for the Marcellus is an example of industry working toward a common goal. “We have gone past regulation and still are self-regulating. We will see more of those kinds of things also.”

The industry will drill an estimated one million unconventional wells by 2035, according to Schlumberger Ltd.’s Salvador Ayala, who is vice president of marketing and technology for the well production services division. Existing technology would require millions of gallons of water in multiple frack stages. The company today is working on perfecting a channel fracking technique that would cut water for fracking by more than half.

“The water scarcity issue is something that has to be in everybody’s mind,” Ayala said.

The University of Pittsburgh’s Joseph M. Katz Graduate School of Business last year calculated that it cost more than $7.6 million to complete a typical horizontal Marcellus well. While fracking made up nearly a third of that amount ($2.5 million), land acquisition, leasing and permitting ($2.2 million) and horizontal drilling ($1.2 million) were also significant expenses.