Chevron Corp.’s Big Foot deepwater project in the Gulf of Mexico (GOM), which ramped up earlier this month, is expected to not only produce copious oil but be a substantial contributor to domestic natural gas stores, according to the Energy Information Administration (EIA). 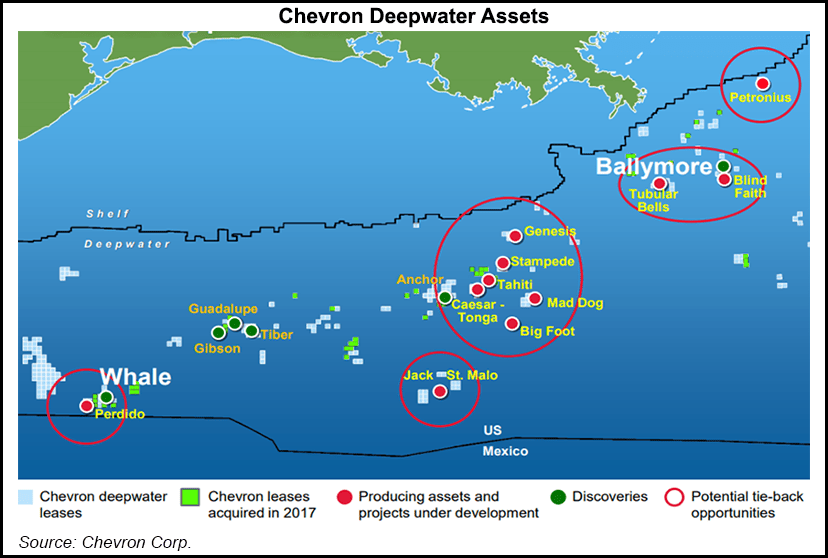 Big Foot, within the Walker Ridge field 225 miles south of New Orleans, is in water depths of around 5,200 feet in a discovery-rich area that Chevron has been tapping since the early 2000s.

Big Foot, with total recoverable resources estimated at more than 200 million boe, has an estimated 35-year production life. The project’s 15-slot drilling and production tension-leg platform (TLP), the deepest of its kind in the world, has capacity for 75,000 b/d of oil and 25 MMcf/d of natural gas.

Big Foot was discovered in 2006 and sanctioned for development in 2010. The TLP, designed to house up to 200 people, was initially expected to ramp up in 2014, but issues with subsea installation tendons delayed the start date.

The field, which may hold up to 14 Bcf, is one of 10 gas-rich producing fields ramping up in the deepwater GOM this year, EIA said. Eight more gas-heavy fields are scheduled to begin producing in 2019, according to information reported to the Department of Interior’s Bureau of Safety and Environmental Enforcement (BSEE).

“These new field starts may slow or reverse the long-term decline in GOM production,” EIA researchers said Monday. “The 16 projects starting in 2018 and 2019 have a combined natural gas resource estimate of about 836 Bcf.”

The 16 projects are the first in the GOM since 2016, when five projects in the Mississippi Canyon and Green Canyon protraction areas added 1,429 Bcf of resources, EIA noted.

The gassiest field scheduled to begin operations through next year is Green Canyon’s Caesar/Tonga Phase II field in 5,000 feet of water, with an estimated 158 Bcf of resource, according to BSEE.

Other gas-heavy fields scheduled to start up before the end of 2019 include the Tomcat field in West Cameron, with an estimated 150 Bcf of resource, and the Vicksburg field in De Soto Canyon with 125 Bcf of resource.

Producing oil and gas in the offshore is expensive and specialized, with production platforms often costing more than $1 billion. Offshore exploration and production also took a sharp hit beginning in the mid-2000s as explorers turned to less expensive onshore shale and tight resources in the Lower 48 states.

Most of the gas produced in the GOM today is associated gas produced from oilfields, similar to the Lower 48.