Gas buyers were all smiles as November bidweek trading drew to a close. Mild October temperatures kept prices on a short leash, and the NGI November Bidweek National Average fell 15 cents to $3.40. Declines were widespread and prices generally fell in the range of 25-30 cents or more in both major consuming and producing regions. The only bidweek gains were registered in the Northeast and ranged from as much as $2 or more in New England to just a few pennies in the Marcellus. 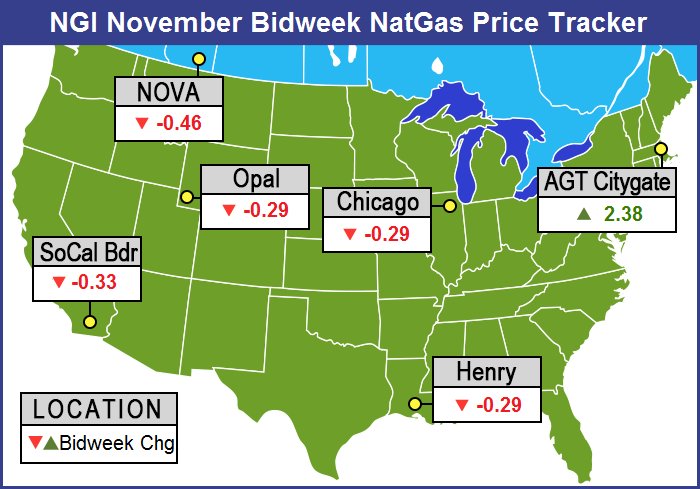 On the losing side of the trading ledger of the actively traded points, SoCal Citygates shed 44 cents to $3.82 and gas at Waha was down 40 cents to $3.40. Deliveries to Northwest Pipeline south of Green River fell 37 cents to $3.34.

But for the third consecutive month, the bidweek Henry Hub index came in several cents above its corresponding NYMEX settlement price. For November, NGI‘s Henry Hub index was $3.77, roughly 4 cents above the November futures settle; the October Henry Hub index of $4.06 was more than 7 cents above the October $3.984 NYMEX close; and the September Henry Hub came in at $3.99, while the futures price was only $3.957. Normally, each monthly Henry Hub bidweek cash price is within a penny of its NYMEX settlement, because of arbitrage conditions. However, for both October and November 2014 trading, the overwhelming majority of physical trading at Henry took place after their respective futures contracts went off the board, when spot market prices for each month were markedly higher.

Marketers and those on the short side of the market were relishing the softer bidweek quotes. “We had a basis of about 17 cents on Michcon and Consumers, and that along with the Nymex [settlement] got us to some of the best prices of the year,” said a Michigan marketer. “Our November index was less than our October so we are looking pretty good at this time.”

The marketer said they had a number of customers who had locked up January through March, but “some are just going to roll the dice and go month to month. They will take their hit if there is one,” he said.

Those hits may in fact become a reality if longer term weather forecasts come to fruition.

Forecasters see a repeat of last year’s frigid winter. At https://theweathercentre.blogspot.com, analysts took a look at a number of factors they think will contribute to a colder than normal winter, if not a repeat of the brutal winter of 2013-14. They studied SST Anomalies in the Sea of Japan, above normal water temperatures in the Gulf of Alaska, above normal temperature anomalies in the Bering Sea, temperatures near Greenland, and the likelihood of a weak El Nino.

Current cold waters in the Sea of Japan allow the jet stream to pull further south and forecasters cite the “Typhoon Rule,” in which storminess and cold in Japan will often hit the US 6 to 10 days later.

A pool of warm water in the Gulf of Alaska hasn’t weakened at all and that permits ridging and high pressure to form, which is setting up conditions similar to 2013-14 in which Wisconsin, Minnesota, and northern Illinois were hit with bone-chilling cold.

Developments in the Bering Sea could be a real wild card, and current above-normal temperatures there could act to keep the Gulf of Alaska cold and stormy and prompt a ridge of high pressure to form over the Rockies. That could send cold to the central and eastern United States. If the ridging shifts more to the east, the central United States becomes warm.

There are also above normal temperatures in the waters near Greenland, and that allows for persistent ridging there and eastern Canada, possibly setting up a blocking pattern and obstructing the normal west-east flow of the jet stream.

At present the thinking is for a weak El Nino to form during the winter. If that is the case, California would receive much needed rain, and the West would enjoy above normal temperatures, which would stretch all the way to the Upper Midwest. Cold weather would be in play in the Ohio Valley.

As bidweek drew to a close Friday, it looked like longer term weather was not exactly on the front burner. It was a tale of two physical markets for weekend and Monday gas deliveries: New England and everyone else.

Most locations outside of New England experienced losses of a nickel to as much as a quarter for points in the Midwest and Midcontinent as weekend temperatures were forecast to work above normal by Monday. In and around Boston, however, weekend and Monday gas soared over $2 on falling temperatures and hefty power loads and strong Monday power pricing. Overall, the market was down 6 cents. Futures continued their march higher, and December gained 4.6 cents to $3.873 and January was higher by 5.3 cents to $3.959. December crude oil fell 58 cents to $80.54/bbl.

Cold, blustery weather was forecast to hit the East over the weekend. “The coldest air since April will blast into the Eastern states and will shock parts of the South this weekend,” said Alex Sosnowski, AccuWeather.com meteorologist. “In many areas, the cold air will be pushed along and enhanced by gusty winds. The winds will be generated by a winter-like storm swinging off the mid-Atlantic coast and possibly taking a curved path back toward New England. The combination of plunging temperatures, winds and other conditions will produce shockingly low [wind chill] temperatures. Levels will dip into the teens over the Appalachians and New England to the 20s over the interior South and along the mid-Atlantic coasts and to the lower 30s in part of Florida.

Forecaster Wunderground.com predicted that for many New England cities temperatures would struggle to make it to seasonal norms. Boston’s high of 52 Friday was expected to drop to 49 Saturday and recover to just 50 by Monday, 7 degrees below the seasonal norm. Hartford, CT’s Friday high of 55 was predicted to slide to 48 Saturday and reach 52 by Monday. The normal high in Hartford this time of year is 56. Providence, RI was anticipated to see its Friday max of 54 drop to 48 Saturday and recover somewhat to 50 by Monday. The seasonal high in Providence is 59.

Normally moderate power loads over the weekend were forecast to rise. ISO New England predicted that Friday’s peak load of 15,530 MW would ease to 15,060 MW Saturday but reach 16,320 MW Sunday.

Marcellus and Appalachian points fell hard. Gas on Transco Leidy was seen 39 cents lower at $2.09, and packages on Tennessee Zone 4 Marcellus shed 20 cents to $1.95. Gas on Millennium came in 15 cents lower at $2.25 and weekend and Monday gas on Dominion South was quoted at $2.44, down 12 cents.

In the Midwest temperatures were forecast to work higher over the weekend adding anywhere from 10 to 20 degrees to Friday’s highs by Monday. Wunderground.com predicted that Milwaukee’s high of 40 Friday would climb to 44 by Saturday and reach 58 by Monday. The normal high in Milwaukee for late October is 54. Chicago’s Friday high of 38 was seen advancing to 44 Saturday and 59 by Monday. The seasonal high in Chicago is 57. Indianapolis’ Friday peak of 50 was expected to ease to 44 Saturday but jump to 60 by Monday, the normal high.

Futures rallied overnight Thursday as a mixture of rain and snow was expected over key energy markets and a cold front begins a trek across the West. “A cold front will move across the West Coast on Friday, while a trough of low pressure affects the eastern third of the country,” said Kari Strenfel, Wunderground.com meteorologist, in a Friday morning report

“A strong low-pressure system will dip southeastward over the Great Lakes and the upper Midwest on Friday. This system will bring a mixture of rain and snow to the Great Lakes, the Ohio Valley and the higher elevations of the central Appalachians,” Strenfel said. “Late-afternoon and evening rain will spread across the northern Mid-Atlantic and New England, while scattered showers and thunderstorms will be possible over the southern Mid-Atlantic and the Southeast. The central third of the country will continue to experience cool, dry conditions due to a large high-pressure system over the Plains and the Mississippi Valley. Temperatures will range between the 30s and 40s from the northern Plains to the upper Mississippi Valley.

“A strong cold front is expected to shift over the West Coast on Friday. This system will bring much-needed rain to portions of central and northern California, including high-elevation snow showers for the Sierra Nevada. Heavy rain will also develop over the Pacific Northwest, while the higher elevations of the Cascades will experience another round of snow showers. Late-evening showers will be possible over southwest California, while the Desert Southwest and the Great Basin will stay mostly clear of precipitation. Temperatures are forecast to drop 10 to 20 degrees as this cold front ushers a cooler air mass over the West Coast.”

Traders are standing aside as weather sorts itself out. “This market continues to show strength and is still reflecting some shifts in temperature forecasts with colder patterns than previously expected ahead,” said Jim Ritterbusch in closing comments Friday to clients. “This strength has been accentuated by chart improvement that was kicked off on Tuesday by an October down-trend line violation and accentuated yesterday by a decisive push to above $3.90 resistance. This week’s wide-swinging price action is reflecting the fact that the short-term weather forecasts are taking on increased importance with temperatures across much of the Midwest seeing their first freezes of the year during the coming weekend. Significant cold deviations are also receiving pronounced impact during this anticipatory phase of the heavy-usage cycle.

“Within such an environment, even an expected renewed warming trend beyond next week is having limited impact. Although we cannot rule out a decided run at the $4 mark early next week, we still see several more storage injections that will be positioning storage for ample winter coverage later next month. We are maintaining a neutral stance.”