President Biden called on Congress to pass a three-month federal gasoline tax holiday – about 18 cents/gallon – in an effort to ease Americans’ price pain at the pump. He also pressed refiners to boost production in the face of solid global oil demand. 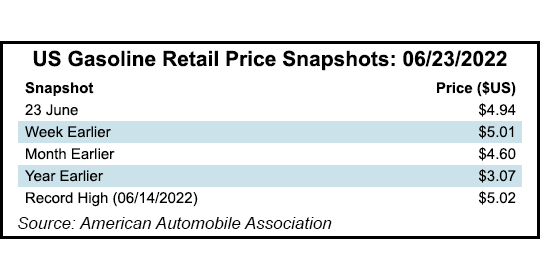 Regular unleaded gasoline hit a record $5.016/gallon on June 14, according to AAA, and remains near that level this week.

However, critics across the oil and natural gas industry panned the proposal as a short-term political move – and analysts doubt a majority of lawmakers will get behind it.

Critics called it a bandage on a gaping wound caused by contradictory federal policy that limits production. The president previously pushed energy companies to invest in renewables and pull back on fossil fuels.

Analysts also cited war in Ukraine that has fanned the flames of inflation on natural gas, which is used as a power fuel by refiners that convert oil into gasoline. Natural gas prices surged in Europe and the United States throughout the spring as countries shunned Russian gas and bolstered competition for precious supplies elsewhere.

Natural gas prices in May reached the highest level in 14 years – and did so again early this month – amid fears of a global supply squeeze induced by Russia’s invasion of its eastern European neighbor.

What Would Be The Impact?

President Biden’s tax holiday “would take little pressure off consumers, but its longer-term impacts are questionable and could paradoxically be detrimental,” Rystad Energy analyst Claudio Galimberti said. He said it fails to address the lack of supply that is a core driver of prices.

“Lower prices would marginally boost demand ahead of the busy summer driving season, potentially pushing the market even more out of balance than it currently is as supply constraints remain a struggle,” Galimberti added. When the tax holiday ends, he said, prices may actually be even higher than today as a result.

“The proposal of a gas tax holiday does nothing to lower energy costs in the long term and could potentially exacerbate inflation by increasing demand without increasing supply,” Beyer said.

Because of this, politicians on both sides of the political aisle are dubious. House Majority Leader Nancy Pelosi, a California Democrat, was noncommittal. “We will see where the consensus lies on a path forward for the president’s proposal in the House and the Senate,” she stated

Stifel Financial Group’s Brian Gardner, chief Washington policy strategist, said the proposal appears “dead on arrival.” Without Pelosi’s commitment, a vote in the House is “doubtful” and getting the needed 60 votes in a politically divided Senate “seems almost impossible.”

The U.S. Energy Information Administration (EIA) said production climbed to 12.0 million b/d for the week ended June 10, up 100,000 b/d week/week and marking the peak level for the year. U.S. output, however, remained more than 1.0 million b/d below the pre-pandemic high, EIA data show.

EIA, originally scheduled to print crude supply data for the June 17 week on Thursday, punted that to at least Friday, citing “systems issues.”

Meanwhile, Saudi Arabia-led OPEC and allied producers, including Russia, are moving upward at a methodical pace as well.

The consortium of oil-rich countries known as OPEC-plus said it would lift production in July and August by 648,000 b/d. That would mark a jump from the roughly 430,000 b/d it has targeted for June.

However, the cartel this year has struggled to meet targets because of political strife in Libya, aging infrastructure in some member countries, and Western sanctions against Russia’s energy complex.

The United States banned imports of Russian oil earlier this year. The European Union recently followed suit with an embargo of most Russian crude.

Should members collectively fall short of goals this summer, global production could continue to trail OPEC demand projections for this year. OPEC expects global crude consumption to surpass the 100 million b/d mark in the third quarter and average 100.29 million b/d for 2022. That would eclipse the pre-pandemic average level of 2019.

Demand is holding up despite high prices as China emerges from pandemic lockdowns and as travel picks up amid summer weather in the United States, the cartel said in a June report.

Until production can catch up globally, critics say, President Biden’s plan would fail to address prices in any enduring fashion.

“The administration needs to stop looking for short-term Band-Aids that lead to higher prices in the long run and take the steps necessary to truly provide Americans with increased supply and energy security,” Beyer said. “The obvious solution is to produce more energy here at home and invest in domestic energy infrastructure.”

Refiners, meanwhile, are operating at or near capacity, EIA data show, despite elevated natural gas prices that inflate their power costs. Aging infrastructure adds challenges. Investors, too, are demanding more money flow to renewable energy – in line with the Biden administration’s overarching climate change policy – and this makes it difficult to secure financing for expansion projects.

“The industry is doing its job to increase production and refining as capacity allows, simultaneously working against decades of underinvestment and reduced access to capital markets,” Beyer said. Biden “must open more federal lands and waters for production, invest in energy infrastructure, encourage Wall Street investment in oil and gas, streamline the permitting processes and expedite approvals.”

All of this comes as inflation surges across nearly every sector – not only energy. The U.S. consumer price index spiked 8.6% in May from a year earlier, hitting the fastest pace since December 1981.

Interest rates in the United States and Europe are climbing as a result. Central banks, including the U.S. Federal Reserve, are hiking rates to make borrowing more expensive and, by extension, cool spending. In turn, they hope, economic activity will slow just enough to bring down consumer prices.

Oil and natural gas producers said throughout the recent 1Q2022 earnings season that they were at once grappling with high expenses and bracing for lofty borrowing costs. In such environments, companies often grow cautious about investments in big-ticket items such as expanded refining capacity or new drilling projects.

At the same time, energy executives join the broader market in concern that rates may rise too high, too fast and drive the economy into recession.

“Inflation is stubbornly high and central banks are on the warpath,” analysts at Barclays said Thursday. “The macro outlook is gloomy” for the second half of 2022.

As such, exploration and production companies may remain hesitant to ramp up investments in oil and gas substantially this year, fearing recession-dampened demand.

For his part, the president tried to strike a balance between the near and long term.

“I fully understand that a gas tax holiday alone is not going to fix the problem,” the president said in televised comments this week. “But it will provide families some immediate relief, just a little bit of breathing room as we continue working to bring down prices for the long haul.”

Energy industry insiders are dubious, saying the president has yet to paint a clear picture that shows how he would bring down prices over time.