The White House said Thursday it is aiming for zero-emission electric vehicles (EV) to account for half of new vehicles sold in the United States by 2030. It also called for more stringent fuel economy standards. 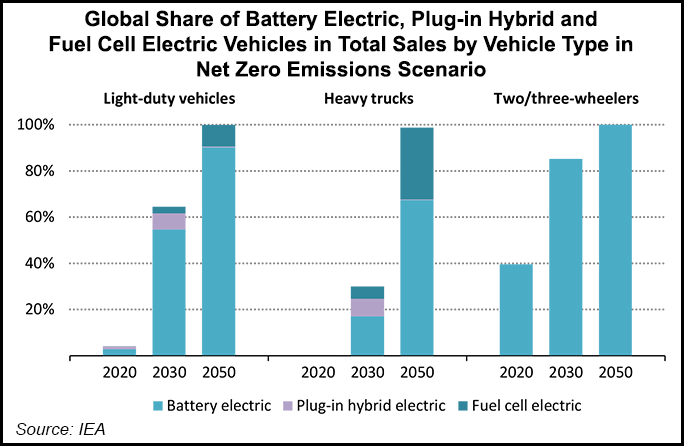 President Biden was set to sign an executive order (EO) setting the ambitious target. EVs have accounted for about 2% of new U.S. vehicle sales in each of the last three years, according to the Pew Research Center.

“While API and our member companies support transportation initiatives that both reduce emissions and ensure affordable vehicle choices for Americans, the best way to accelerate U.S. climate progress is through an economy-wide carbon price policy rather than costly market mandates,” API’s Ron Chittim, vice president of downstream policy, told NGI.

Concurrent with the EO, the Environmental Protection Agency (EPA) and Department of Transportation (DOT) were set to “announce how they are addressing the previous administration’s harmful rollbacks of near-term fuel efficiency and emissions standards,” the White House said.

“Through these coordinated notices of proposed rulemaking, the two agencies are advancing smart fuel efficiency and emissions standards that would deliver around $140 billion in net benefits over the life of the program, save about 200 billion gallons of gasoline, and reduce around two billion metric tons of carbon pollution.”

Under President Obama, the stringency of the CAFE standards was set to increase by 5% annually for the 2021-2026 period. The Trump administration cut it to 1.5%.

The White House made a geopolitical argument for EVs as well. It warned Thursday that “China is increasingly cornering the global supply chain for electric vehicles and batteries with its fast-growing electric vehicle market.

“By setting clear targets for electric vehicle sale trajectories,” countries such as China “are becoming magnets for private investment into their manufacturing sectors — from parts and materials to final assembly.”

The U.S. EV market is only one-third that of China, the White House said.

To catch up, President Biden is proposing a national network of EV charging stations, delivering point-of-sale consumer incentives for purchasing EVs. It also is proposing to finance “the retooling and expansion of the full domestic manufacturing supply chain.” It also wants to innovate “the next generation of clean technologies” to maintain a competitive edge, according to the White House.

The announcement comes as the Senate nears a possible final vote on the Bipartisan Infrastructure Investment and Jobs Act, which includes $7.5 billion to build out an EV charging network. The legislation also would set aside $10 billion for low- and no-emissions buses, along with $60 billion for new transmission lines to transport renewable electricity.

“This represents a dramatic shift from the U.S. market today that can be achieved only with the timely deployment of the full suite of electrification policies committed to by the administration in the Build Back Better plan,” the companies said. They endorsed the “purchase incentives, a comprehensive charging network of sufficient density to support the millions of vehicles these targets represent,” along with investments in research and development, “and incentives to expand the electric vehicle manufacturing and supply chains in the United States.”

“We are falling behind China and Europe as manufacturers pour billions into growing their markets and expanding their manufacturing,” Curry said. “Today’s announcement on emissions standards brings more certainty and better planning for the auto industry and UAW member future jobs.”