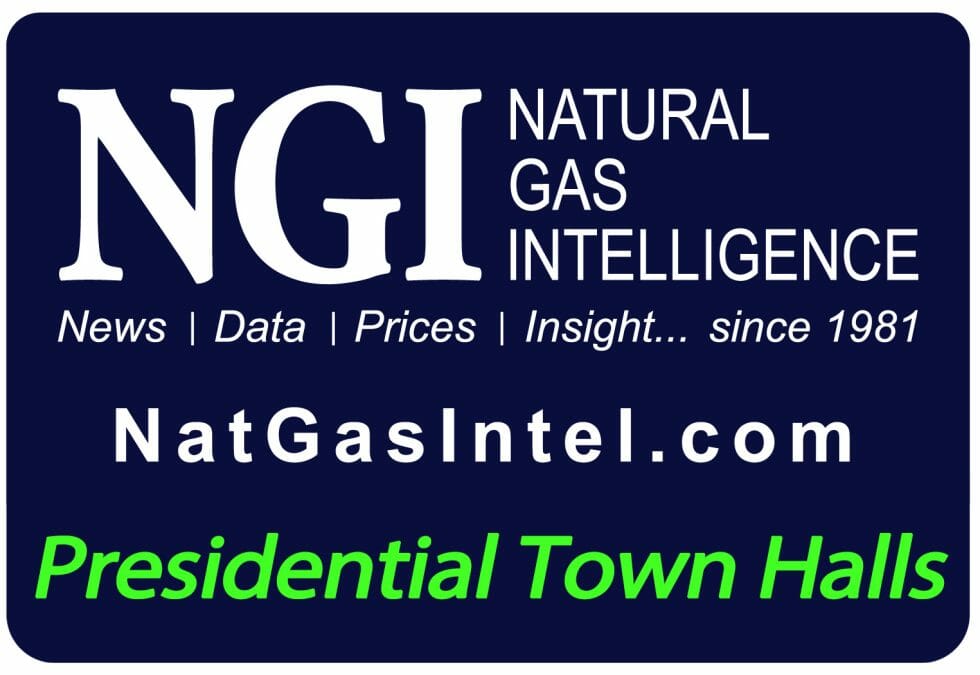 Thursday initially was scheduled to be a combined town hall. Instead the candidates separately participated in simultaneously broadcast events. Biden’s event in Philadelphia lasted 90 minutes and Trump’s forum in Miami was one hour.

During the president’s town hall, he was peppered with questions focused largely on the administration’s response to the coronavirus pandemic — and his experiences recovering from the virus. However, there were no queries regarding oil and gas or climate change.

Biden’s town hall featured an exchange about energy production, a front-and-center issue in Pennsylvania, home to the mighty Marcellus Shale and the No. 3 coal producing state. To that end, the candidate was asked about fossil fuel production, including the use of fracking.

Biden, as he has said previously, said the unconventional drilling technique had to be done responsibly, without emitting the highly potent greenhouse gas methane or “polluting the well.”

He also noted, “there are well over 100,000 wells that are left uncapped” in the Pennsylvania region. “We could hire 128,000 of these people who are working in the industry to cap these wells and get a good salary doing it now.”

Biden’s estimate is in line with data compiled by the Pennsylvania Department of Environmental Protection (DEP), which said a year ago the state had more than 9,000 confirmed orphan and abandoned oil and gas wells in its inventory. DEP also has estimated that “hundreds of thousands of legacy wells may be unaccounted for, posing a major financial liability and environmental, public health, and safety risk.”

A paper published in July by Columbia University’s Center on Global Energy Policy found that a federal program to plug orphan wells could create up to 120,000 jobs if 500,000 wells were plugged. The program could provide a post-pandemic lifeline to struggling oilfield workers and curb the environmental risks of unplugged orphan wells, namely methane emissions.

As it has with many Obama-era environmental regulations, the Trump administration has sought to rescind controls on methane emissions from the oil and gas industry through regulatory rollbacks and lawsuits.

The Trump government also has advanced lease sales in the Alaska National Wildlife Refuge, and modified the Clean Water Act to hasten environmental reviews of infrastructure projects. All of these face ongoing legal challenges.

The president also has repeatedly praised his administration’s decision to withdraw the United States from the United Nations climate accord, the international deal to reduce emissions of planet-warming gases. Former President Obama – with Biden as his No. 2 — helped negotiate the landmark agreement and put in place many of the energy regulations that Trump has since attempted to dismantle.

As for electricity, Biden said “the future rests in renewable energy,” citing solar as “the single fastest growing energy source in the world right now.” His comments corroborate the World Energy Outlook 2020 published Tuesday by the International Energy Agency. Executive director Fatih Birol said he sees solar “becoming the new king of the world’s electricity markets…Based on today’s policy settings, it is on track to set new records for deployment every year after 2022.”

As he did during a raucous Sept. 29 debate with President Trump, Biden distanced himself from the Green New Deal legislation championed by Rep. Alexandria Ocasio Cortez (D-NY), indicating its goal to eliminate fossil fuels entirely is unrealistic. He said however, that he would end tax breaks and subsidies for the oil and gas industry.

Biden said meeting his climate plan’s 2035 net-zero goal would require ramping up investment in carbon capture technology, building out the transmission grid to accommodate new solar and wind capacity, and expanding battery storage. He also said investments made by the Obama administration under the 2009 American Recovery and Reinvestment Act, aka Recovery Act, helped drive down the costs of wind and solar energy.