The White House on Friday pledged to expedite approvals for liquefied natural gas (LNG) projects and coordinate additional LNG supplies to Europe to end the continent’s dependence on Russian fossil fuels by 2027. 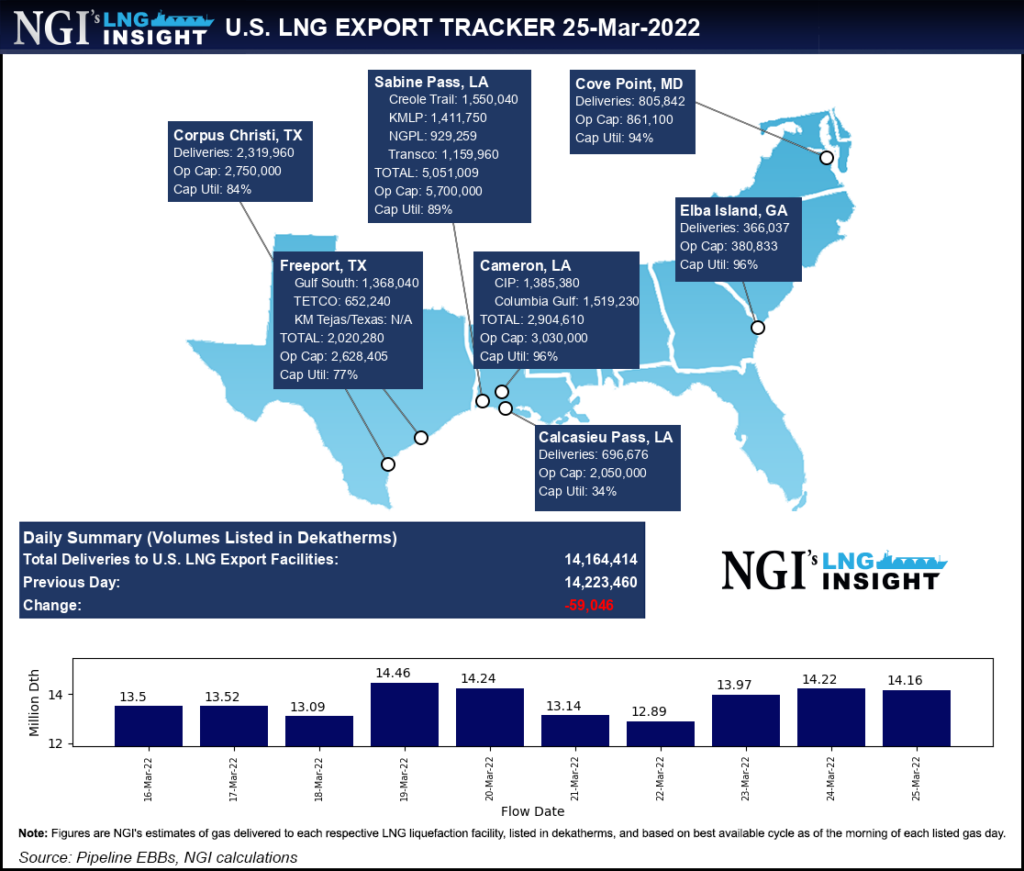 The objective is part of a joint task force established by the United States and European Commission (EC) in response to Russia’s invasion of Ukraine last month.

The United States plans to work with domestic and international partners to ensure additional LNG volumes for the European Union (EU) market of at least 15 billion cubic meters (Bcm), or 529.6 Bcf in 2022, “with expected increases going forward,” according to a joint statement.

Longer term, the EC plans to work with EU member states to ensure stable demand for additional U.S. LNG supplies of about 50 Bcm/y, or 1.8 Tcf/y, through at least 2030.

“To accomplish this, the European Commission is going to work with the member states to store gas across the continent, to build more infrastructure to receive LNG, and to take steps to increase the efficiency of gas,” President Biden said.

The task force is aiming to ensure there are sufficient natural gas storage levels in Europe by next winter. The EC also has proposed regulations to ensure that existing storage infrastructure is filled to 90% of capacity by Nov. 1 of every year.

“So we’re going to have to make sure the families in Europe can get through this winter and the next while we’re building an infrastructure for a diversified, resilient, and clean energy future,” the president said.

The joint pledge is based “on the understanding that the price formula of LNG supplies should reflect long-term market fundamentals, and stability of the cooperation of the demand and supply side, and that this growth be consistent with our shared net zero goals,” officials said. The price formula is expected to include consideration of the Henry Hub spot price and other stabilizing factors.

The United States, meanwhile, “commits to maintaining an enabling regulatory environment with procedures to review and expeditiously act upon applications to permit any additional export LNG capacities that would be needed to meet this emergency energy security objective,” officials said.

The EC, for its part, “will work with the governments of EU member states to accelerate their regulatory procedures to review and determine approvals for LNG import infrastructure, to include onshore facilities and related pipelines to support imports using floating storage regasification unit vessels, and fixed LNG import terminals.”

In the short term, the ability of the United States to ramp up LNG exports is limited, with existing terminals already operating near capacity.

Ramping up gas supplies will not, however, undermine the energy transition, policymakers said.

The United States and EC pledged to “undertake efforts to reduce the greenhouse gas intensity of all new LNG infrastructure and associated pipelines, including through using clean energy to power onsite operations, reducing methane leakage, and building clean and renewable hydrogen-ready infrastructure.”

Policymakers said the United States and EU remain “committed to meeting the goals of the Paris Agreement, achieving the objective of net zero emissions by 2050, and keeping a 1.5 C limit on temperature rise within reach, including through a rapid clean energy transition, renewable energy and energy efficiency.”

However, they said, “Natural gas remains an important part of the EU energy system in the green transition, including by ensuring its carbon intensity decreases over time.”