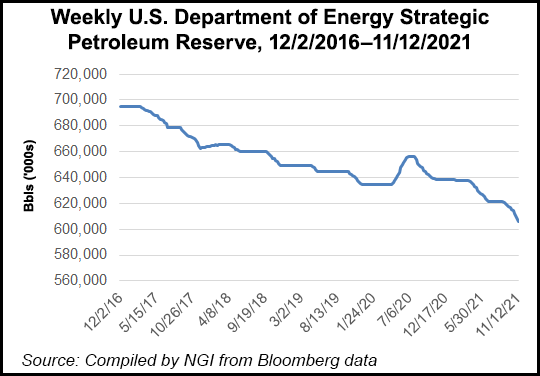 The Biden administration, which had publicly pondered the move for weeks, did not specify the expected impact – or its timing — on prices at the pump. The Whited House did not note the total release by the other countries.

The coordinated release would mark the first of its kind since 2011, when the United States joined 27 countries to release 60 million bbl in an effort to replenish supplies lost in a conflict that eventually devolved into a civil war in Libya. However, the plan announced Tuesday would be the first to include China, the world’s second-largest economy.

Tuesday’s announcement comes in the wake of West Texas Intermediate crude futures – the U.S. benchmark – topping $85/bbl this fall, a seven-year high. International Brent oil prices also have surged. Because gasoline is derived from oil, prices at the pump have followed suit, recently reaching the highest national average level in seven years, according to AAA.

This has developed alongside vaccine rollouts and a rapid recovery in travel from the depths of the coronavirus pandemic.

The Organization of the Petroleum Exporting Countries (OPEC) predicted that world oil consumption would grow by 5.8 million b/d in 2021 and another 4.2 million b/d next year, reaching an average of about 100 million b/d. That would put demand on par with 2019 levels.

Output is rising, led by OPEC and allied oil-producing countries, though production is not expected to align with demand until some time next year The collective cartel, known as OPEC-plus, began in August to increase production at a 400,000 b/d monthly pace. OPEC officials have said if increases continue at that level and the coronavirus does not intensify anew this winter, supply/demand balances should align in the first half of 2022.

U.S. production last week ticked down 11.4 million b/d from 11.5 million b/d the two prior weeks, according to the Energy Information Administration (EIA). That was up from the 10.5 million b/d level of a year earlier, EIA reported, though it was still well below pre-pandemic levels.

The SPR releases are intended to provide relief until output rises more notably.

The administration’s announcement was met with mixed reviews. Analysts said it could have some medium-term impact, though it was not a panacea for prices. Critics said the Biden administration should temper what the industry views as an anti-oil posture.

U.S. producers are increasing output but also are balancing those efforts with investor mandates – supported by the White House — to invest in renewable fuels.

“America’s real strategic petroleum reserve is in places like the Permian Basin and the Gulf of Mexico,” said the U.S. Chamber of Commerce’s Christopher Guith, Global Energy Institute senior vice president. “Instead of ineffectual band aids, the White House should focus on policies that will encourage domestic production of oil and natural gas.”

Rystad Energy analyst Bjornar Tonhaugen cautioned that the SPR release would likely have only a modest impact on the U.S. and global markets.

“Assuming there is large appetite for these barrels, and the drawdown is around 1 million b/d,” the SPR release “would be somewhat significant in an 80 million b/d global crude market – but only for a couple of months,” Tonhaugen said.

“For drivers wondering if gasoline prices will get lower as a result of the SPR release in the U.S., the reality is that this may not happen at all” — if demand further rises — “or only with a significant lag time,” he added. “For this to impact gasoline supplies, it must result in higher gasoline production from refineries, which could only happen with a lag.”

The SPR holds more than 600 million bbl. EIA said U.S. crude inventories for the week ended Nov. 12, excluding those in the SPR, decreased by 2.1 million bbl from the previous week. At 433.0 million bbl, stocks were 7% below the five-year average.