The Department of the Interior (DOI) will release a proposed five-year offshore oil and gas leasing program by the current program’s expiration date of June 30, Secretary of the Interior Deb Haaland said Thursday. 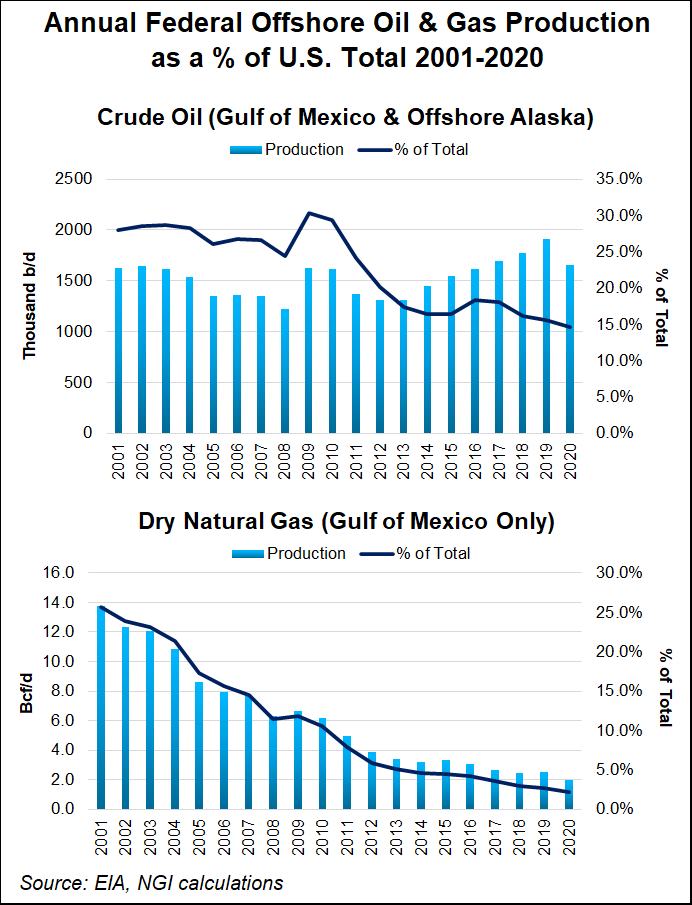 Haaland confirmed DOI’s intentions during testimony before the Senate Committee on Energy and Natural Resources. She said the Trump administration had ceased working on the new leasing program, which delayed Interior.

“The previous administration stopped work on the new five-year plan in 2018, so there has been a lot to do to catch up,” Haaland told the committee chaired by Sen. Joe Manchin (D-WV). “Varying, conflicting litigation has also been a factor.”

With the current program set to expire, industry advocates have warned of a potential lapse in offshore leasing that could impact production in U.S. coastal waters.

The announcement by DOI “confirms they are significantly behind in this multi-year process and will release a proposed program by June 30 – the day they should be finalizing it,” said the American Petroleum Institute’s (API) Frank Macchiarola, vice president of policy, economics and regulatory affairs “The practical effect of this is that it is unlikely there will be offshore lease sales before the end of 2023.”

Haaland’s announcement follows the cancellation this month by DOI of three offshore lease sales that had been included in the 2017-2022 program.

Lease Sale 258 in Alaska’s Cook Inlet was shelved “due to lack of industry interest in leasing in the area,” DOI said. Sales 259 and 261 in the Gulf of Mexico “will not move forward due to delays caused by conflicting court rulings that impacted work on these proposed lease sales, which in turn, precludes the ability to have these sales before the National OCS Program expires.”

DOI conducted one offshore lease sale under the current program in late 2021. However, a federal judge invalidated the results, citing insufficient analysis of its potential climate impacts by the Trump administration.

The most recent proposed five-year plan was put forward in 2018 by the Trump administration. In line with a 2017 executive order (EO) by Trump, the plan sought to unlock vast swaths of U.S. coastal waters that President Obama had declared off-limits for drilling. However, a federal court in 2019 nullified Trump’s EO and the five-year plan was never finalized.

In a statement Thursday, DOI noted that a proposed leasing program does not equate to a decision to issue specific leases or authorize any drilling or development.

During Thursday’s hearing, Manchin criticized the Biden administration for taking “as long as it possibly could” to put forward a new five-year program.

Haaland, for her part, said, “As we take this next step, we will follow the science and the law, as we always do. This requires a robust and transparent review process that includes input from states, the public and Tribes to inform our decision-making.”