The American Petroleum Institute (API) and the U.S. Chamber of Commerce joined Republican leaders in calling on the Biden administration to lift its temporary pause on federal oil and natural gas leasing after a Louisiana district court ordered the moratorium be lifted. 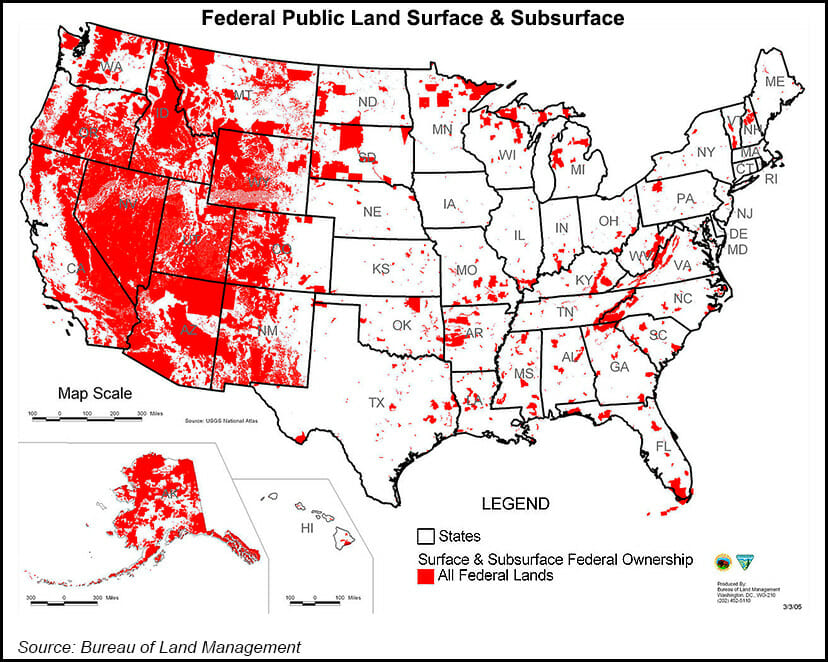 Fourteen states in March challenged President Biden’s executive order (EO), which in January, called for the Department of Interior to pause new federal permits to develop oil and gas onshore as well as offshore. Interior in April then halted new permitting through at least June to continue the review, which is expected to be issued this summer.

U.S. District Judge Terry A. Doughty of the Western District of Louisiana found for the plaintiffs in issuing a preliminary injunction late Tuesday. He ordered the pause be lifted nationwide in Louisiana et al v Joseph R. Biden Jr. et al, No. 2:21-CV-00778.

“This court finds the plaintiff states’ alleged injuries are both particularized and concrete,” Doughty wrote. “They have alleged loss of proceeds as a result of the pause for new oil and gas leases on federal lands and waters, from bonuses, land rents, royalties and other income.

“Plaintiff states have also alleged loss of jobs and economic damage as a direct result of the pause. These alleged damages are concrete, particularized and imminent.”

“No existing lease has been canceled as a result of any of the actions challenged here, and development activity from exploration through drilling and production has continued at similar levels as the preceding four years,” the Biden administration argued.

However, Doughty wrote that the plaintiffs had established that the pause would result in damages. The states cited the loss of funding for a coastal master plan in Louisiana, reduced state revenues, damages to the economy, loss of jobs, higher oil and gas prices, and a reduced energy export economy.

Doughty wrote that the government’s actions already had resulted in the loss or delay of two Gulf of Mexico (GOM) lease sales, 257 and 258, and other state lease sales. The loss of GOM Lease Sale 257, which had been scheduled for March, “has had immediate impact due to loss of bonus payments and ground rents. Additionally, a pause for any significant length of time would allegedly result in other losses.”

“This court does not favor nationwide injunctions unless absolutely necessary,” Doughty wrote. “However, it is necessary here because of the need for uniformity,” and the lease sales are on public lands and in offshore waters across the nation. “Uniformity is needed despite this court’s reluctance to issue a nationwide injunction. Therefore, the scope of this injunction shall be nationwide.”

The injunction is to remain in effect pending resolution or an appeal. If Doughty’s ruling is challenged, it next could be heard by the U.S. Court of Appeals for the Fifth Circuit.

ClearView Energy Partners LLC said the ruling “exemplifies a headwind to President Biden’s re-regulatory ambitions.” However, the “victory may be short-lived” for the plaintiffs. “Not only do we expect Interior to appeal the ruling, but we also think the Biden administration might look to pause leasing via other mechanisms.”

Reaction was swift In response to the court’s order, with API urging the Biden administration to lift the leasing pause.

“The federal leasing pause is harmful to our nation’s national security, environmental progress and economic recovery,” said API’s Kevin O’Scannlain, vice president of Upstream Policy. The court ruled that “natural gas and oil leasing must resume on federal lands and waters, and we urge the administration to move expeditiously to follow the court’s order and lift the federal leasing pause.

“Now is the time for the administration to put an end to this ‘import more oil’ policy that threatens American jobs and deprives state and local communities of much needed revenue, all while likely increasing emissions and the risks of climate change.”

The U.S. Chamber’s Global Energy Institute (GEI), joined by at least 125 state and local chambers in 30 states, also cited their opposition to the moratorium. In a letter to the Biden administration sent on Wednesday, GEI said an economic impact analysis found that by 2025, the pause could result in the loss of more than 154,000 jobs, $22 billion-plus in gross domestic product and $4 billion in tax revenue.

The decision to potentially ban new permitting “won’t help you meet your climate goals,” the Chamber leaders said. “In fact, it will be counterproductive by artificially limiting supply, forcing our nation to use more oil and gas produced overseas in nations that have less stringent environmental restrictions.”

The ban also could have rippling impacts across the country.

“The president’s ban on new energy production on federal lands and waters hurts our economy and harms local communities while getting us no closer to achieving climate goals,” said GEI President Marty Durbin.

“The ban will shift oil and natural gas production overseas, including to nations with less stringent environmental standards. State and local chambers from around the nation representing businesses from Main Street, to the assembly line, are asking the president to reverse course, and we hope he hears this message loud and clear.”

New Mexico Chamber CEO Rob Black said his state would be hit hard because of the propensity of federal lands permitted to develop oil and gas.

“More than half of the total oil and natural gas revenue that New Mexico receives is from production on federal lands, meaning that the ban jeopardizes over $730 million for public education and $340 million for health care and human services in the state,” Black said.

Communities on the Western Slope of Colorado also would suffer, said Grand Junction Area Chamber CEO Diane Schwenke. “Over 36% of energy production in the state is on federal lands — nearly all in Western Colorado. Halting all new production in this region will have widespread impacts throughout our economy.”

The Biden administration “does not have authority to ignore the law and unilaterally stop oil and gas leasing on federal lands in the United States,” said general counsel Tim Tarpley of the Energy Workforce & Technology Council. The national trade association represents more than 600,000 jobs.

The Council, said Tarpley, “will continue to work with the administration and Congress to ensure the Department of Interior follows the law and makes public lands available for all kinds of energy development to benefit the people of the United States and provide our country with the energy it needs to thrive.”

Politicians on both sides of the aisle also weighed in.

Sen. John Barrasso (R-WY) is ranking member on the Energy and Natural Resources Committee. He called the court ruling a “victory for the rule of law and American energy workers. The president’s illegal ban has hurt workers and deprived Wyoming and other states of a principal source of revenue that they use for public education. President Biden should immediately rescind his punishing ban and let Americans get back to work.”

“We need to update our fossil fuel leasing laws across the board to establish a cleaner, more sustainable standard of use for our public resources, as this committee is already seeking to do,” Grijalva said. “Our economic and environmental future shouldn’t be subject to rulings based on industry-funded science or opportunistic complaints that we didn’t hear until President Biden was sworn into office.”