The Biden administration’s goal to develop at least four regional hydrogen hubs is advancing with an $8 billion investment tailored to encourage development. 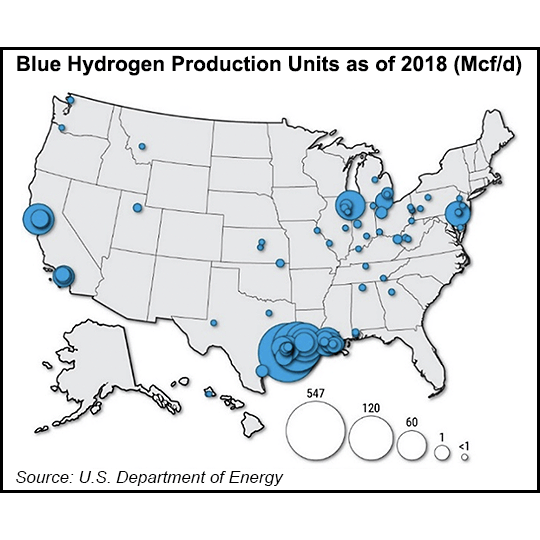 The Department of Energy (DOE) said it would issue a funding opportunity announcement (FOA) in the near future. Prospective applicants have already expressed interest in the hydrogen hubs initiative, which became law under the Infrastructure Investment and Jobs Act (IIJA) in November.  According to the IIJA, the DOE is required to fund at least four regional hydrogen hubs with an $8 billion investment distributed from fiscal years 2022-2026.

“Hydrogen energy has the power to slash emissions from multiple carbon-intensive sectors and open a world of economic opportunity to clean energy businesses and workers across the country,” said DOE Secretary Jennifer M. Granholm.

The United States currently produces about 10 million metric tons/year of hydrogen, according to the DOE.  Almost all the domestic hydrogen today is produced through a process involving natural gas, and without abatement of the resulting carbon dioxide emissions.

According to the IIJA, one hub should demonstrate end-use in electricity generation, while another would be for industrial activities, with at least one for residential/commercial heating, and one for end-use in transportation.

The IIJA also requires that at least one regional hydrogen hub demonstrates production from a fossil fuel, with at least one using renewable energy and at least one using nuclear energy. The law also calls for at least two of the hubs to be in the largest natural gas-producing regions of the Lower 48.

Based on that criteria, at least one hub would likely be located in the Appalachian Basin, with another in the Haynesville Shale, which straddles East Texas and North Louisiana.

Appalachian production is set to grow 194 MMcf/d from May to June, reaching 35.67 Bcf/d, according to the Energy Information Administration (EIA).

“Appalachia has all the tools foundational to creating a regional rub: a first-class energy resource, ready labor force, energy infrastructure and the manufacturing base needed for a robust and successful hub,” Marcellus Shale Coalition President David Callahan told NGI.

Governors from Kentucky, Ohio, Pennsylvania and West Virginia also announced individually that their states would seek funding for a hydrogen hub.

“Natural gas has played a significant role in reducing emissions across economic sectors for years, and sustained development of our abundant resources is what will maintain energy reliability and affordability as the industry continues to evolve,” Callahan said.

The Haynesville region is set to lead gas production growth across the Lower 48 in June, adding 239 MMcf/d month/month to 15.102 Bcf/d.

The governors of Arkansas, Louisiana and Oklahoma announced in March they had formed a partnership to compete for federal funding.

Elsewhere in the country, the City of Houston and California are also expected to seek funding. Together, Connecticut, New Jersey, New York and Massachusetts, as well as Colorado, New Mexico, Utah and Wyoming are planning to seek federal funding for two separate hydrogen projects.

The hydrogen hub program aims to bolster the Biden administration’s goal of a 100% carbon-free electrical grid by 2035, followed by net-zero carbon emissions by 2050.