Australia’s BHP Billiton Ltd. has penned a cooperation agreement with Mexico’s Petroleos Mexicanos (Pemex) to exchange technical knowledge, experience and practices for the offshore and onshore. Executives are hoping it will be for the long term. 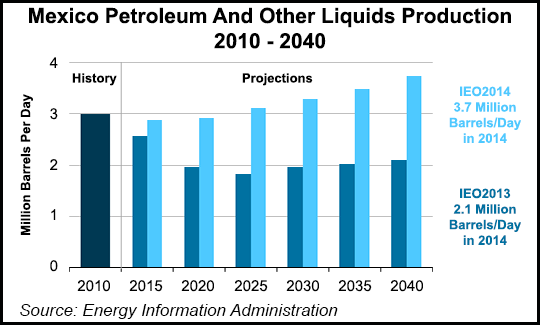 The memorandum of understanding (MOU) follows constitutional changes by Mexico earlier this year that allow Pemex to compete with multinational firms (see Daily GPI, Aug. 14). The changes would allow private firms to exploit the country’s oil and gas reserves through different types of contracts.

BHP already is a big player in the United States, with operations in the onshore and the deepwater Gulf of Mexico (GOM). Similar opportunities await in offshore and onshore in Mexico, said Cutt, including an area that BHP engineers know well: an extension of the Paleogene play into the Perdido Fold Belt of the Lower Tertiary Trend. Operators working the U.S. waters already have laid claim to big stakes in the trend. And Pemex also has made some discoveries.

“We obviously wouldn’t be here if we didn’t think the relationship would extend beyond the exchange of technical data,” Cutt said. He signed the MOU with Pemex CEO Emilio Lozoya. “Once we get the data, once we understand the fiscal regime, we’ll be able to actually move quite quickly…We see this as a long-term opportunity for us, and we want to give it a real good shot.”

The first round of oil and gas exploration licenses is to begin in February for the onshore and offshore, which would offer a lot of opportunities for new entrants, Cutt said. However, BHP wants to review the fiscal terms of the leases to know what kinds of investments it would make.

“All of industry is in the same situation,” he said. “I think everybody has been open and honest about the fact that the terms will need to be competitive for industry to bring large capital dollars to bear.”

However, BHP has no plans in the near term to buy unconventional acreage in Mexico, given the ample opportunities available in the United States.

During fiscal 2014, BHP production increased 4% to a record 246 million boe, thanks in large part to strong onshore production in the United States, where liquids volumes increased by 73% (see Shale Daily, July 23). Among other things, it doubled output from the BP plc-operated Atlantis project in the GOM.

“We are confident that we are one of the lowest-cost and best drillers in the deepwater Gulf of Mexico,” Cutt said. ‘We have proven we can build projects better and faster than most operators, and our offshore facilities have some of the highest operational uptimes and safety records anywhere in the world. We look forward to sharing our technical knowledge and experience with our Mexican partners.”

He pointed to the Shenzi deepwater project in U.S. GOM waters as an example “of what we can do and the deep capacity we possess within our offshore organization.” The Shenzi field, in which BHP is operator with a 44% working interest, is 125 miles off the coast of Louisiana (see Daily GPI, Jan. 24; Jan. 17, 2012).

“Shenzi continues to be one of the great success stories in the deepwater Gulf of Mexico, whether it’s time from discovery to first production, drilling costs, safety, uptime of approximately 95% or sustaining production levels,” said Cutt. “What we can offer is absolute focus as Mexico seeks partners to help develop its enormous petroleum resources. Right now, our global offshore organization is capable of moving with considerable speed, safety, agility and flexibility.”