Australian energy conglomerate BHP is increasing its upstream hold in the deepwater Gulf of Mexico after buying out Hess Corp.’s 28% stake in the Shenzi development for $505 million. 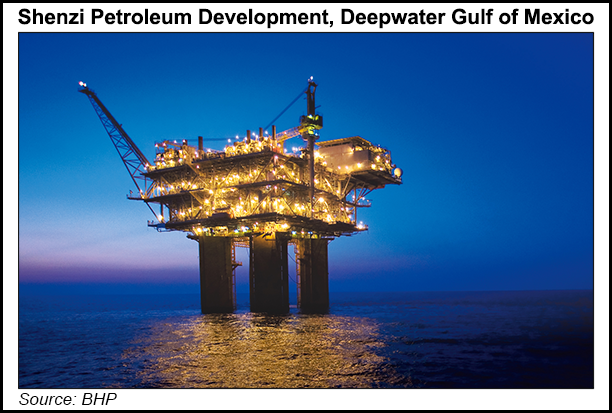 The transaction raises BHP’s interest in Shenzi, which it already operates with a 44% stake, by an estimated 11,000 boe/d. Repsol SA has the remaining 28% stake.

The purchase is part of a “strategy of targeting counter-cyclical acquisitions in high quality producing or near producing assets,” BHP management said. The company has long been one of the most active bidders for federal leases offshore.

“While our strict capital allocation framework tests ensure all investments are resilient to low points in the commodity cycle, we also recognize the potential for price upside over the medium term given the global slowdown in development activity, and we are well positioned to participate in that upside,” management said. We continue to believe that the fundamentals for oil and advantaged gas will be attractive for the next decade and likely beyond.”

BHP’s Geraldine Slattery, president of Petroleum Operations, said the deal “aligns with our plans to enhance our petroleum portfolio by targeted acquisitions in high quality producing deepwater assets and the continued derisking of our growth options.

“We are purchasing the stake in Shenzi at an attractive price, it’s a Tier One asset with optionality, and key to BHP’s Gulf of Mexico heartland. As the operator, we have more opportunity to grow Shenzi high-margin barrels and value with an increased working interest.”

BHP at one time had been a heavy hitter in the Lower 48 and a pioneer of the unconventional movement. However, after marketing the portfolio, BP plc’s Lower 48 unit BPX in 2018 scooped up most of the assets in a mega deal worth about $10.5 billion.

Hess plans to use the proceeds from the Shenzi deal to invest in Guyana’s offshore, said CEO John Hess.