BHP Billiton Ltd., whipsawed by sharp impairments and activist investors that want the company to train its development solely on conventional oil and mining, is actively marketing its U.S. onshore portfolio, an 800,000-plus leasehold that runs through the Permian Basin, Haynesville, Eagle Ford and Fayetteville shales. 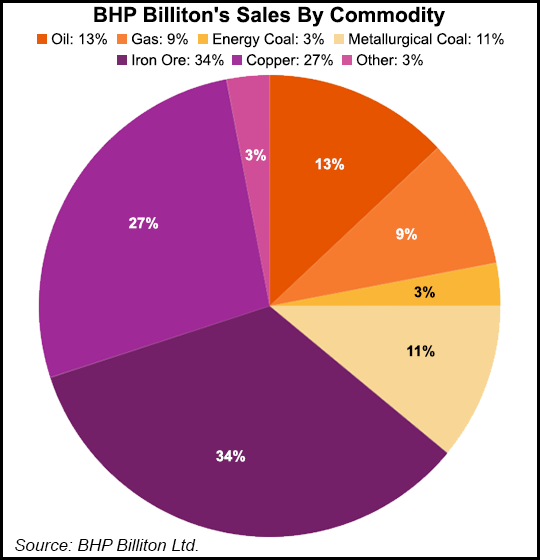 The Australian-based conglomerate, one of the largest foreign investors in U.S. oil and gas, plans to take its time and bide its options, CEO Andrew Mackenzie said Monday. The company also has no plans to sell its deepwater Gulf of Mexico (GOM) assets nor its Trinidad properties.

Mackenzie discussed the makeover during a wide-ranging conference call with analysts, which laid out results for 2Q2017 and additional details of the sweeping reformation announced in April.

Under pressure for more than a year to sell off the underperforming onshore assets, Mackenzie said BHP “has classified our onshore U.S. as noncore. However, with value as our guide, we will be patient as we pursue options to exit our position.”

Long a GOM investor, BHP was an early mover in U.S. onshore development, beginning with its $4.75 billion joint venture in early 2011 with Chesapeake Energy Corp. Later in 2011 BHP doubled down, agreeing to pay more than $12 billion to take overPetrohawk Energy Corp., which was working the Permian, Eagle Ford and Haynesville.

However, the investments have proved to be a boondoggle. In 2012, BHP took a $2.8 billion charge against losses in the Fayetteville. Two years later, the Arkansas leasehold was up for sale; a deal has never been consummated.

In 2015, BHP took another $2.8 billion charge against its onshore properties, mostly from losses in the Eagle Ford. And in early 2016, the company took a $7.2 billion impairment charge against the carrying value of its leaseholds in the Permian, Eagle Ford, Haynesville and Fayetteville shales.

“As I have said previously, the shale acquisitions were poorly timed,” Mackenzie told analysts. “We paid too much, and the rapid pace of early development was not optimal. When we entered the industry, our objective was to leverage our systems and scale and become an industry leader in shale and then replicate the opportunity around the world.

“However, following a global endowment study about two years ago, it became apparent to us that the opportunities to replicate U.S. shale oil elsewhere did not exist.”
Since then, BHP has move quickly to lower U.S. onshore investments and its footprint through acreage trades and swaps, he said.

“This sharpened focus informed our regular portfolio review, and we have now concluded that all these shale assets are noncore. We have used extensive input from independent advisors and we are now pursuing options…to exit our quality acreage.

“However, all options will take time. We will be disciplined and use this time productively to maximize the value of this acreage through larger completions, acreage consolidation and midstream solutions in the Permian, gas hedging in the Haynesville and further well tests to assess prospective resource across all the fields. We will be guided by value. We know and will know what the acreage is worth in our hands and are prepared to be patient.”

BHP’s preference for the onshore acreage is to “sell the businesses through a relatively small number off-trade sales,” Mackenzie said. “There is an execution risk around that, and so in the interest of making sure we can do things relatively quickly, I don’t want to eliminate other ways in which we could exit these businesses,” which could include mergers, initial public offerings or special purpose vehicles.

An outright sale is likely the “best opportunity” to restore and maintain value for shareholders, he said.

“One of the features of shale, which I think we have grown to like a bit less with time,” is that “you have to continue to invest to actually maintain the value of those businesses,” Mackenzie said. “In this case we are very fortunate that we have investments that we can make that we think performed very well on the capital allocation framework. And as I said, they won’t just add profitability and value, they will add marketability to these assets.

“But as always we will…review this very, very regularly through the lens of the capitalized allocation framework. Because of the short-term nature of shale we do that with a much greater frequency right to the very top of the company.”

Meanwhile, BHP remains positive about the outlook for its conventional oil assets and its global mining assets.

“We have had positive drilling results in the Caribbean and in the Gulf of Mexico,” said the CEO. “Additionally, the successful bid for Trion in the Mexican Gulf of Mexico provides us with further opportunity. Just this month at Wildling…in the U.S. Gulf of Mexico, we encountered oil in multiple horizons, which appear to be in communication with our neighboring discoveries at Shenzi North and Caicos. While it remains early days and appraisal is still underway, there are encouraging indications of this being a significant commercial discovery.

“Taken together, these successes have the potential to add valuable reserves to support our conventional petroleum business in the years to come.”

And business is growing in Mexico’s GOM, where in December BHP was named the first deepwater partner ever for Mexico’s state-owned Petroleos Mexicanos (Pemex). BHP won the right to jointly explore two blocks in the prolific Perdido Fold Belt, partnering with Pemex in the Trion field. The Trion 1 discovery well in 2012, drilled in 8,250 feet of water about 24 miles south of the maritime border, was estimated four years ago to hold 250-400 million boe of proven, probable and possible reserves. Pemex at the time considered the field to be one of the top 10 discoveries in the entire GOM.

Conventional oil “is a great business; it has been a great business for this company for over 60 years,” Mackenzie said. “It has phenomenal returns…and we are good at it. We have some of the lowest costs in the industry about $10/bbl.”

With only the Trinidad assets and the U.S./Mexico GOM businesses together, “we have the opportunity to provide competitive options to extend the track record of petroleum within BHP for a few decades to come,” said the CEO.

BHP is eyeing the longer term, where it sees oil demand for vehicles declining. A year ago the company signaled a “more rapid penetration of electric vehicles, and we see that starting to take off, perhaps as early as late 2020s and starting to have a lot of uncertainty into the market around 2040, 2050 onwards.

“But until then of course, there could be lot of really good money to be made in conventional oil if you have got areas where you can move fast and the Gulf of Mexico both sides Mexican and U.S. and Trinidad have been chosen as fast moving provinces…” BHP has been pivoting back to conventional oil since it began reducing its shale footprint “for the better part of two or three years, and you see some of the fruits of that pivot today…”