The U.S. rig count held steady for the week ended May 17, dropping one unit overall to fall to 987, although major plays, including the Permian Basin and Marcellus Shale, saw larger net declines, according to data from Baker Hughes, a GE Company (BHGE). 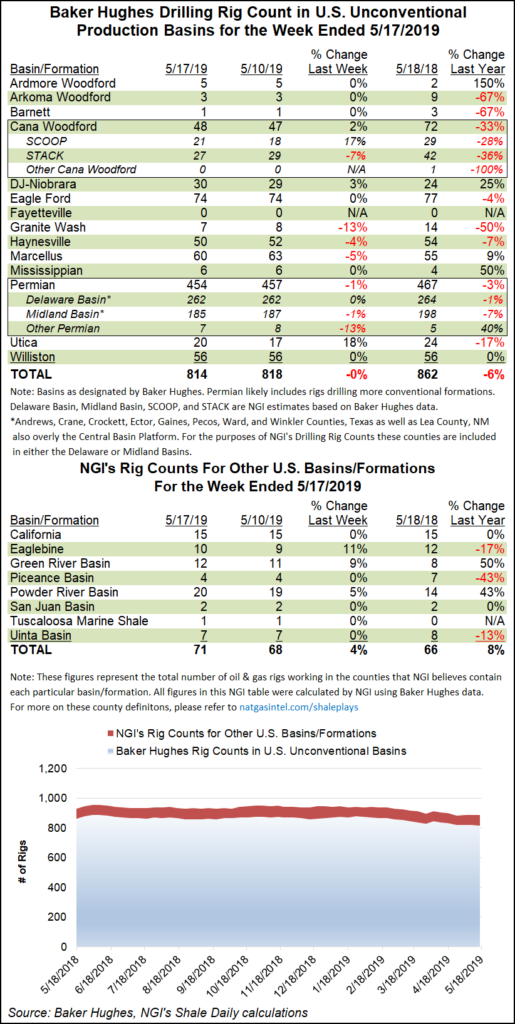 The United States dropped three oil-directed rigs for the week, partially offset by the return of two natural gas-directed units, leaving the combined domestic count 59 units behind its year-ago total of 1,046. Land activity declined by three units, while the Gulf of Mexico added two rigs to grow its total to 22, versus 18 a year ago. Three vertical units and two directional units were added, while six horizontal units packed up shop.

The Canadian rig count ended the week unchanged at 63 (from 83 a year ago), including 22 oil-directed rigs and 41 gas-directed rigs. The combined North American count dropped one unit to 1,050, versus 1,129 in the year-ago period.

Among plays, the Permian and the Marcellus each saw three rigs exit during the week, dropping their totals to 454 and 60, respectively. As of Friday, the Marcellus had outpaced its year-ago total by five units, while the Permian lagged 13 units behind the 467 active rigs in the play at this time last year.

On the other side of the ledger, the Utica Shale gained three rigs, bringing its total to 20, versus 24 in the year-ago period.

Also among plays, the Haynesville Shale dropped two rigs, while the Granite Wash dropped one. The Cana Woodford and Denver Julesburg-Niobrara each added one rig.

Among states, Pennsylvania and Texas each dropped three rigs, mirroring the declines in the Marcellus and Permian. Oklahoma and Alaska each dropped two rigs, while West Virginia dropped one.

Ohio picked up four rigs for the week, in line with Utica gains, while Wyoming added three and Louisiana added two. New Mexico added one rig, increasing its count to 103, up from 92 last year.

The capital discipline instilled by many exploration and production companies has put the squeeze on permitting in the Lower 48, with a “more opaque outlook” expected in the near term, according to Evercore ISI. Analysts led by James West compiled April permitting data from state and federal officials to gauge activity levels in the onshore and offshore.

There was a month/month contraction across the Lower 48, driven by a decline almost across the board, led by sharp reductions in Denver-Julesburg/Niobrara formation activity. Overall, 4,905 permits were issued in April, off 1,784 month/month but up 7% from a year ago and flat year-to-date, according to Evercore.

“Gassy formations demonstrated some resiliency as monthly declines decelerated,” with the Marcellus posting levels of 149 permits, down 54 from April. The Haynesville’s permits declined to 141, off 85 from slower activity in North Louisiana.