The Organization of the Petroleum Exporting Countries and its allies, aka OPEC-plus, agreed on Thursday to ramp up crude production in anticipation of increased demand. The shift comes despite elevated uncertainty about the coronavirus pandemic and its still festering impacts on global travel and economic activity. 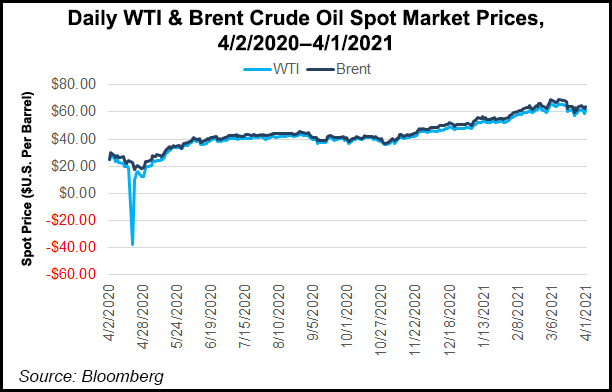 Saudi Arabia-led OPEC and an allied group of leading producers headed by Russia agreed to boost output by 350,000 b/d in May and June, and then increase to as much as 450,000 b/d in July. Saudi Arabia also would begin to unwind cuts it made earlier this year.

The deal marked a compromise. Saudi Arabia, concerned about virus outbreaks and new lockdowns across Europe, had sought to hold the line on production.

As recently as Tuesday, OPEC Secretary General Mohammad Sanusi Barkindo emphasized during the cartel’s latest technical meeting a “need to remain very cautious and attentive to changing market conditions” amid “ongoing uncertainties and fragility” caused by the pandemic, according to a readout provided by OPEC. Cartel officials had made similar comments several times in March.

At the meeting, a panel of technical experts lowered their 2021 global oil demand outlook. They estimated an increase in consumption of 5.6 million b/d this year, down from 5.9 million b/d previously.

Russia, however, pushed for increases. With Brent crude, the international benchmark, holding steady above $60/bbl, producers can generate solid profits as long as vaccination programs prove successful, virus outbreaks dissipate and economic activity rebounds in the second half of 2021, analysts said.

“Saudi Arabia usually calls the shots, but with oil above $60 and demand likely to build, it makes sense to start taking some steps toward more output,” StoneXFinancial Inc.’s Thomas Saal, senior vice president of energy, told NGI’s Shale Daily. “And the Saudis don’t want prices to go up too much. That happens, and all of a sudden producers in the U.S. shale start coming back in, and that’s competition.”

In total, analysts at BMO Capital Markets estimated, the changes will represent an increase in OPEC-plus production to 38 million b/d in July from about 35.5 million b/d in March, “largely due to the unwinding of Saudi Arabia’s extra voluntary cut of 1 million b/d.” Prior to the pandemic, the analysts said, the cartel and its allies produced about 41.3 million b/d.

Early this year, Saudi Arabia voluntarily curtailed production by 1.0 million b/d in both February and March. Last month, it extended the reduction through April. Previous cuts across the cartel’s members and partner countries were largely held intact.

“The output rise is not likely to be detrimental, especially for June and July as demand will likely also rise, and that is reflected in the market reaction,” Rystad Energy analyst Louise Dickson said. “A lot of producers have been hurt by the production curbs and are itching to boost their output.”

U.S. production has crept up this year. According to the U.S. Energy Information Administration (EIA) Weekly Petroleum Status Report (WSPR), released Wednesday, domestic crude production rose during the week ended March 26. It averaged 11.1 million b/d during the week, up 100,000 b/d from the prior week and up from the 2021 average of about 10.8 million b/d, the agency said.

The latest weekly production figure was around the highest of the pandemic era. Supply, however, was still down from 13.0 million b/d a year earlier.

Rystad estimates for 2021 indicate U.S. unconventional production could deliver about 10% of OPEC’s expected increase in global demand. Dickson said that leaves OPEC-plus plenty of runway to gradually accelerate supply in coming months. However, that assumes vaccine success and global economic recovery taking hold over the summer.

Success “will be increasingly difficult” to gauge “as demand recovery becomes more uneven between the haves and have-nots, in terms of vaccinations,” Dickson said. This is “already on display in looking at real-time fuels consumption in the U.S., which is loosening virus restrictions, and Europe, which is again closing the fortress doors until a cure is delivered at its doorsteps.”

The latest WSPR showed that U.S. crude inventories in the March 26 week — excluding those in the Strategic Petroleum Reserve — fell by 900,000 bbl from the previous week. Still, at 501.8 million bbl, U.S. stocks were 6% above the five-year average. The agency said total petroleum demand, meanwhile, increased 9% week/week and 13% year/year.

“The market has bought the OPEC-plus story that demand will increase and the barrels will be needed, despite multiple calls by OPEC for caution in the days leading up to the meeting,” said Mizuho Securities USA LLC’s Robert Yawger, director of energy futures.