The Pennsylvania Public Utility Commission (PUC) said Monday that natural gas producers have paid most of about $206 million owed under the drilling impact fee enacted under Act 13, surging past the $180 million the state thought it would take in this year from its new omnibus Marcellus Shale law. 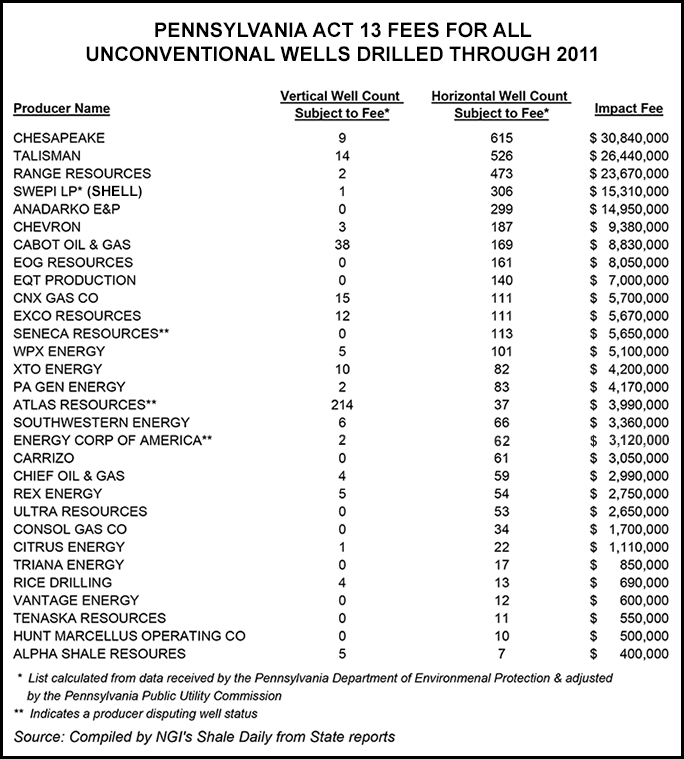 According to the PUC, the 58 producers affected by the fee have collectively paid $197.6 million, or about 96% of the total amount due, $205.9 million. Most of the producers, 35 in all, have paid their entire obligation, while six have paid a portion of their fees and 17 haven’t paid anything yet.

Only two other producers had impact fees of more than $10 million: SWEPI LP, a Royal Dutch Shell plc subsidiary, at $15.3 million; and Anadarko E&P Co. LP at $15.0 million.

“While these figures are indeed staggering by any measure, it also serves as a stark reminder that we must ensure that we have common sense policies in place, especially local zoning uniformity at the center of Act 13, which encourage economic growth, job creation and additional revenue,” Marcellus Shale Coalition President Kathryn Klaber said Monday.

Using spud data reports provided by the state Department of Environmental Protection (DEP), the PUC determined that 4,034 horizontal and 419 verticals wells were subject to the impact fee. These well were spud in 2011 or earlier, but for the PUC’s fee calculation purposes the first year for all of the wells will be considered as 2011.

Nearly half of the vertical wells subject to the impact fee were drilled by Atlas Resources LLC, which had 214. Cabot Oil & Gas Corp. had the second-highest number of vertical wells at 38. Most of the other producers with vertical wells had fewer than 10.

The PUC will set the rate for wells drilled this year on Jan. 31, 2013 using a tiered structure set according to the average price of natural gas on New York Mercantile Exchange for the last day of the preceding 12 months and adjusted for the Consumer Price Index. The payments for the 2012 fee are due April 1, 2013.

The fee lasts for the first 15 years of the life of a well and decreases annually.

Although the PUC data was not broken down by county, it is believed that Bradford County will receive the most impact fee money because it led unconventional production during the first half of 2012 (see Shale Daily, Aug. 27). Other counties that should receive sizeable portions of the impact fee pot include Susquehanna, Lycoming, Tioga, Washington, Greene, Wyoming, Westmoreland, Clinton and Fayette counties.

According to the DEP’s spud reports, the Catherine Conner 1 well — a vertical well drilled in Toby Township, which is in Clarion County — is the oldest active unconventional well to be affected by the impact fee. It was spud by Donna Bricker on Nov. 29, 1979 and is targeting the Geneseo/Burket Shale, which is just above the Marcellus.

The DEP said the oldest active unconventional well targeting the Marcellus is the Hunter 1 well in Washington County’s Hopewell Township. It was spud by JM Best Inc. on June 18, 1982.

Bricker and JM Best have each been levied $10,000 impact fees by the PUC. So far neither has paid the amount due. Bricker, a farmer in the Parker area of Clarion County, could not be reached for comment Tuesday.

“We have mailed each name on the list we received from the [DEP] information about the impact fee and what they need to do to either pay the fee or be exempt from it,” PUC spokeswoman Jennifer Kocher told NGI’s Shale Daily on Tuesday. “If the well is producing less than 90,000 cubic feet of gas a year, it also meets the definition of a stripper well, meaning they do not have to pay the fee. We are hoping to talk with each of the people on the list to clear up these kinds of issues.”

Act 13, which was signed into law by Gov. Tom Corbett in February, amended Title 58 (oil and gas) of the Pennsylvania Consolidated Statutes and empowered the PUC to collect the fee on behalf of local governments (see Shale Daily, Feb. 15). The law gives Pennsylvania’s counties the choice to collect an annual per-well fee from operators. The fee is set annually based on the price of gas and declines over 15 years but is set at $50,000 for all unconventional horizontal gas wells drilled through 2011. The revenue from the program is split between state and local governments, with the local share split between counties and the municipalities in those counties.