The $4 billion, 1,663-mile Rockies Express Pipeline (REX) that will transport Rocky Mountain natural gas to the Midwest and East will change market dynamics unlike any project before, said the head of Bentek Energy at GasMart 2007 Thursday.

“I think REX is probably going to play 52-card pick-up with the industry at least twice and maybe three times,” said Bentek Energy President Porter Bennett. “And just as it settles down, [you’ll] have Midcontinent Express…wreak havoc again.” The 780-mile Midcontinent Express pipe, sponsored by Kinder Morgan, would provide takeaway capacity from constrained producing areas, such as the Anadarko Basin.

“REX is probably one of the biggest things to hit the hydrocarbon market since the death of the dinosaur,” Bennett said. It will impact supply prices, basin gas markets and volumes on traditional pipelines.

REX, which is sponsored by Kinder Morgan, Sempra Pipelines & Storage and ConocoPhillips, is being built in three phases. Phase I of the pipeline runs from Greasewood, CO, to Wamsutter to the Cheyenne Hub in Colorado, and went into service in February (see Daily GPI, Feb. 15). Phase II, which was approved by FERC in April, would extend the pipeline from the Cheyenne Hub to Audrain County, MO, and has a targeted in-service date of January 2008 (see Daily GPI, April 20). Phase III would extend the pipeline into Clarington, OH, and is scheduled to be operable in mid-June 2009. The entire pipeline, when completed, would have 1.8 Bcf/d of capacity.

“Clearly, REX [will bring] gas across the United States at a much lower price based on the relative price points today,” Bennett noted. The Chicago market will see more supply options as a result of Phase II of REX, which should result in lower prices, Bennett said. “In Phase II and Phase III [of REX], you’re going to see increased volumes [come] to Ohio and Northeast markets…Prices should fall in both places.”

But this is “just the tip of the iceberg” of what will happen, Bennett said. He expects Phase II of REX to begin to displace traditional gas volumes. “You can’t put incremental volumes plus the traditional volumes into the market area. So it’s going to force the traditional supply sources to find a new home,” he noted.

With Phase III of REX, “gas that goes to Ohio [and the] Northeast right now on Tennessee [and] Tetco [Texas Eastern], some of that is going to have to find a new home because the Rockies gas is going to displace it,” Bennett said.

“When that happens, [you’ll] see volumes go back down to the Gulf. Gulf volumes are going to increase just because of the lack of ability to [sell] it all in the Northeast,” he noted. Rockies gas is going to move all the way to the East because the netback is going to be much better for Rockies producers to sell it in the eastern markets, Bennett said. He thinks Rockies gas will help offset some of the declining Canadian gas volumes to the U.S. Northeast. He expects that traditional Anadarko and Permian supplies will return to the Midwest.

There will be a lot of natural gas in the Gulf Coast from East Texas production and liquefied natural gas imports, Bennett said. “Where’s it going to go? Some of it is going to go, I think, probably up to Canada.” As a result of the abundant supply, Gulf-area prices likely will be depressed “quite a bit” relative to other production areas, he noted.

He said he anticipates that Anadarko Basin prices will probably rise when Phase III of REX goes into operation because “now there’s more people pulling Anadarko than there were in Phase II.” 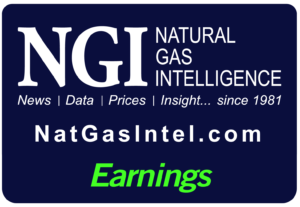