The oilfield services industry has been mangled, chewed up and spit out since commodity prices began tumbling in late 2014. Like a champ, operators picked themselves up and fought back by revamping customer contracts, improving efficiencies and costs, and as they have always done, delivering ever-better technology. 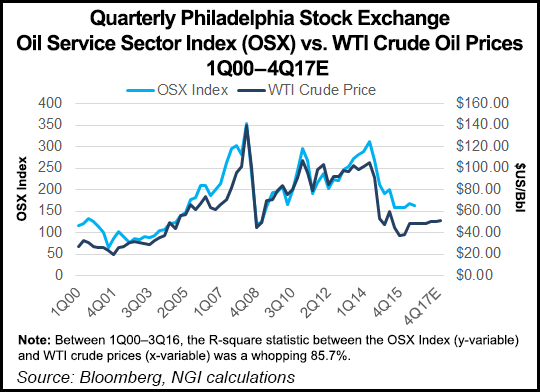 Third quarter conference calls offered no doubt that operators in general are feeling better about the future as customers slowly raise rigs and talk up more spending in 2017. While the more expensive offshore industry remains on the mat, they too aren’t down for the count.

NGI recently took a deeper look at the oilfield services segment and found that while many of the major players reported continuing losses in 3Q2016, the market appears to have hit bottom and is leveling off. Get the latest from those out in front of the E&P field in NGI’s new 23-page report titled Light at the End of the Tunnel: OilField Services Execs Cautiously Eye a 2017 Recovery.

“After seven quarters of unprecedented activity decline, the business environment stabilized as expected in 3Q2016, confirming that we have indeed reached the bottom of the cycle,” Schlumberger Ltd. CEO Paal Kibsgaard said during the quarterly conference call. Between July and September, the No. 1 OFS in the world “started pricing recovery discussions with a large part of our global customer base…While there is a general understanding from our customers that pricing will have to increase, there were no material movements during the quarter, but with the recent increase in oil prices, the basis for these discussions has now strengthened.”

“We are told that recent efficiency gains, standardization efforts and cost deflation are making offshore opportunities competitive with shale and conventional plays,” he said. “In the interim, our customers’ focus is on the quick payback, high returns that certain brownfield opportunities offer.”

Keeping investments high and enthusiasm higher have been dual challenges, but those able to keep the investment bucks going to upgrades and maintenance are ready, willing and able to get to work.

“For the first time since the downturn began, we posted top-line growth in our wellbore technologies and completion and production solutions segments,” National Oilwell Varco Inc. (NOV) CEO Clay Williams said during the quarterly call.

The move to longer laterals and more fractures has become the good news story of the year as records continue to be broken across the unconventional space. For example, NOV designed and manufactured a record-setting string of 2-5/8-inch coiled tubing measuring 25,595 feet and 149,748 pounds for an undisclosed service company, which enabled the customer to mill out composite bridge plugs and perform logging runs in a well with a 12,500-foot lateral.

The well was “far beyond the typical maximum lateral lengths for coiled tubing mill outs in West Texas,” Williams said. “Every step of the process, including string design, planning, milling and shipping and spooling and installation, was executed by NOV’s trained engineers and technicians in less than 10 days.”

Tulsa-based Helmerich & Payne Inc., the last of the big oilfield drilling contractors to issue quarterly results last week (and included in the report), continues to see most of its U.S. onshore rigs heading to the Permian Basin, but increasingly, high-spec activity is beginning to increase elsewhere, CEO John Lindsay said during a quarterly conference call last Thursday.

H&P’s flagship FlexRig fleet, a big draw for unconventional operators, trades on its alternating current (AC) drives that are integrated into the mast, enabling the drill string to be electronically controlled from a computer touch-screen in the driller’s cabin.

Since activity “troughed in May,” the company has reactivated more than 32 FlexRigs in the U.S. onshore. “Of those, 28 are in the spot market and four are on term contract,” Lindsay said. Fifteen now are working in the Permian, five in Oklahoma’s Woodford Shale, three each in the Bakken and Haynesville shales, and two each in the Eagle Ford Shale, Powder River Basin and Niobrara formation.

At Patterson-UTI Energy Inc., the utilization rate for high-spec land rigs now exceeds 90%, and the Houston contractor is upgrading older Apex rigs to meet incremental demand and grow the fleet as pricing traction gains pace. Likewise for its hydraulic fracturing business, the calendar is filling up into the first half of 2017.

Completion companies and onshore drillers “have the torque,” said Evercore ISI analyst James West. The downturn struck North American operators “the fastest and hardest,” because the region tends to have shorter investment cycles and more volatile pricing, but “we continue to believe pressure pumping will be the first market to recover, followed by land drilling.”

Halliburton Co., which performs more pressure pumping in North America than any other OFS provider, in October moved with U.S. Silica Holdings Inc. the largest sand unit train of its kind to date, traversing a route from Illinois to Texas. The record-breaking unit train carried nearly 19,000 tons of U.S. Silica’s white sand from its largest plant in Ottawa, IL, to Halliburton’s Elmendorf South Texas Sand Plant south of San Antonio. Unit trains are designed to reduce transit time from mine to transload facility. The white sand load was carried via BNSF Railway.

Halliburton also recently renegotiated a proppant supply contract with Hi-Crush Partners LP, providing the OFS giant “with pricing discounts and a reduced term in exchange for increased volume requirements during an interim term,” Hi-Crush said in a filing with the U.S. Securities and Exchange Commission.

Hi-Crush plans to reopen its sand mine in Augusta, WI, to meet growing sand demand. The mine has nameplate capacity of 2.86 million metric tons/year of northern white sand. Hi-Crush and Halliburton have partnered on sand volumes for more than two years.

“While there has been demand for certain grades of sand that would have fit the Augusta product mix and rail origin, order visibility was low and demand was below levels needed to justify producing from that facility,” Hi-Crush CEO Bob Rasmus said. “The contract amendment we announced today provides the visibility and sustainability of demand to enable us to operate at the efficiencies and cost structure we require.”

U.S. Silica CEO Bryan Shinn said in August that even though proppant demand had not picked up significantly, the company was “beginning to see a few green shoots, which may be signs of an impending market recovery.”

Carbo Ceramics Inc., mostly a ceramic proppant provider, has seen its market share pummeled as customers go for cheaper sand to build their wells. Management said during the third quarter conference call that cheap Chinese ceramics would continue to challenge pricing through 2017.

However, Carbo is finding that if you can’t beat them, join them. It has reactivated its 1 billion pound/year Wisconsin sand plant and is now running a skeleton crew able to generate 100 million pounds/year, about 10% of full capacity.

Silica sand demand in North America is forecast to expand 5.1% per year through 2020 to 82.8 million metric tons, according to a new study by The Freedonia Group. The expansion would represent “a somewhat slower pace than that recorded during the 2010-2015 period” as low commodity prices into the near term depress the number of new wells drilled, limiting opportunities for fracture sand suppliers.

“Nevertheless, increasing intensity of use per well will fuel robust growth in silica sand consumption, making it the fastest growing market in North America into the long term,” according to Freedonia’s report, “World Industrial Silica Sand.”

Last year silica sand production in North America accounted for 28% of world output, making it the second largest regional supplier after the Asia/Pacific region. Most trade is intra-regional, with silica sand moving from the United States to Canada and Mexico.

The biggest news in between all of the noise from 3Q2016 results is General Electric’s (GE) announcement in late October to become majority shareholder in Baker Hughes Inc., which plans to roll in GE’s oil and gas business. Before the mega-merger news, analysts already were detecting a major transformation was underway across the sector, particularly the oil services and equipment subsector, as Big Data takes command.

“We envision a continued transition to solutions-based services, an increase in the digitalization of the oilfield, and ultimately the unlocking of the power of Big Data,” said West. “The combination between Baker Hughes and GE Oil & Gas is a true enabler of this transition, especially pulling through the strong technology businesses of both companies on the Predix platform and through the GE Store…With customers increasingly seeking solutions, cost savings, efficiencies, standardization, and improved productivity the ‘Era of Dominant Global Major Oilfield Service and Equipment’ providers has arrived.”

A 3Q2016 review of global OFS spend by Douglas-Westwood (DW) found that a renaissance is ahead for the onshore through the remainder of the decade, led by U.S. operators. Global capital expenditures (capex) is forecast to increase 10% year/year, reaching $187 billion in 2020.

“After a lean few years, DW expects a recovery in onshore drilling in the U.S. through the forecast period, predicting a 143% increase between 2016 and 2020 for annual onshore wells drilled as rising oil prices bring lower-quality shale acreage back into economic viability,” DW researchers said. “This will result in a recovery in OFS spend.”

Although onshore spending is looking stronger, combined capex levels by 2020 for the United States, China and Russia are seen at a “significant discount” to previous levels, with overall spend across the three totaling $129 billion in 2020, about 65% of its 2014 peak.

As commodity prices began to fade two years ago, E&Ps reduced their activity and thus their spend. In turn, the oilfield operators worked with customers to revise contracts, reduce costs per well and improve well performance.

The result has been a stunning reversal in drilling costs.

Rystad Energy, which tracks through a proprietary database the cost and production for every single U.S. unconventional well, recently calculated how the breakevens have improved because of the OFS improvements. Using Whiting Petroleum Corp.’s activity in the Bakken Shale, researchers found that the average breakeven prices fell to about $29/bbl this year from around $67 in 2013, a reduction of 55% in only three years.

“The question then becomes how these operators managed to achieve such a reduction, and how much of the reduction is sustainable in the future,” said Rystad researchers.

The consultant studied five key drivers: high grading, well performance, efficiency gains, unit costs and production cost. Researchers concluded that well performance and efficiency gains are structural in nature, while high grading, unit costs and production costs may prove to be cyclical and could reverse course eventually. About $16/bbl from the total $37/bbl decline was attributed to structural factors, while most are cyclical.

Reversing all of the cyclical factors may cause breakevens to increase in the U.S. onshore by 65% in the next few years, which could set the stage for “an emphatic” upcycle for the OFS sector, said Evercore’s West.

Following the Baker-GE deal, could more merger and acquisition activity be ahead? The next upcycle for the sector likely will include a few themes:

The Baker-GE tie-up may help redefine the boundaries of the future cycles, West said.

“We continue to expect more bolt-on acquisitions that will focus on acquiring niche technologies or incremental exposure to certain regions/basins,” West said. “However, we don’t expect an influx of ‘like-for-like’ M&A, as bloated capital structures or valuations keep prospective buyers on the sidelines.”